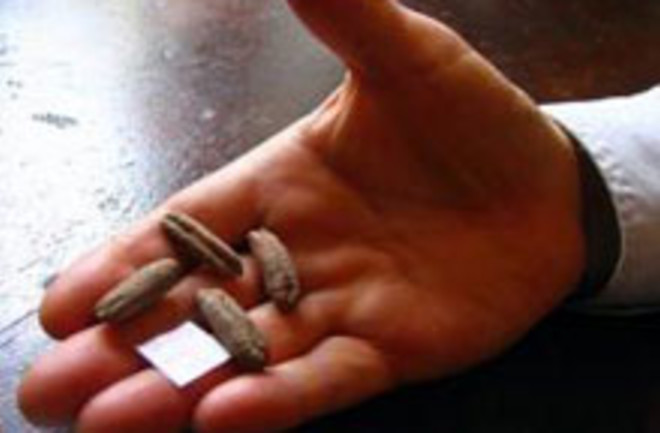 After 2,000 years of dozing in the dry heat of the Judean desert, the seed of a date palm has been coaxed back to life. The seed germinated, sprouted, and grew flourishing palm fronds. Now researchers are waiting for the young tree to mature and are hoping fervently that it's a female, which could bear fruit that would allow botanists to propagate its line. Back in the ancient era known as the 1960s, archaeologists discovered a handful of wizened seeds in the ruins of King Herod's fortress in Masada, near the Dead Sea. The seeds were kept on a shelf for 40 years before the Israeli archaeobotanist Mordechai Kislev decided to see if some life remained in the brown husks.

In 2005, Kislev gave the seeds to botanists who soaked them in hot water and nutrients and planted three in enriched soil. Three months later, the dirt cracked and a single shoot appeared. The researchers nicknamed the tiny sapling “Methuselah” after the oldest person whose age is mentioned in the Old Testament [Science News].

5:27.)Researchers verified the age of the seed with radiocarbon dating; at roughly 2,000 years old, the seed is the oldest ever to germinate (it takes the record away from a 1,300-year-old Chinese lotus seed). In the report, published in the journal Science [subscription required], researchers say that the extreme heat and dryness of the desert probably helped prevent the seed from rotting. After preliminary genetic testing of Methuselah, Kislev's team believes it is an extinct species, genetically distinct from the modern date palms that grow in Iraq, Morocco, and Egypt. The researchers have had a look at the plant's DNA ... and found it shares just over half its genes with modern date cultivars

(Methusaleh was a whopping 969 years old, per Genesis

While the team cautions that it's difficult to draw conclusions from just one plant, if Methuselah is a different species it may represent a strain that's better adapted to the Judean environment.

Once upon a time, the Dead Sea region was famous for its full-size, succulent dates. The fruits were renowned for their sweetness and for their use in treating respiratory problems and depression. Indeed, Judean dates represented Israel's biggest export business 2000 years ago. But centuries of wars, invasions, and drought disrupted date cultivation, and by the time of the Crusades 800 years ago, the region's vast date forests had disappeared [ScienceNow Daily News].

If the resurrected date palm is a female (would they change its name to Methuselette?) and if it can produce normal fruit and seeds, researchers could create offspring and eventually reintroduce the trees to their native habitat. "I hope it will be a sweet female,” [Kislev] says. “Even if it is not so sweet though, I think many people would like to have part of this fruit, or something from this very nice lady"