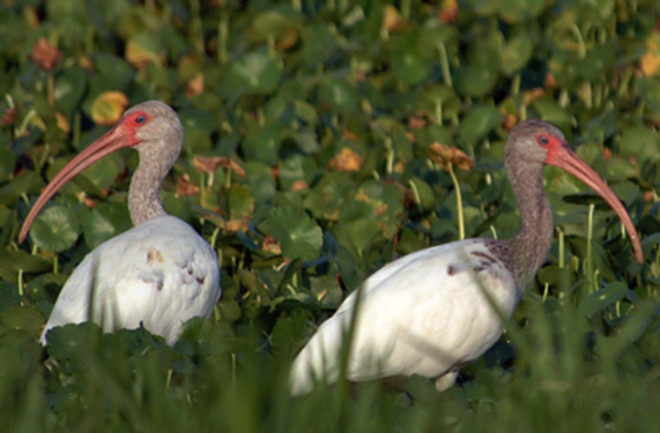 It's no surprise that a chemical as potent as methylmercury harms wildlife when it enters an ecosystem in high concentration. In the case of wetland birds, researchers have found, it can even change sexual orientation, causing males to pair off with other males.

"We knew mercury could depress their testosterone (male sex hormone) levels," explained Dr Peter Frederick from the University of Florida, who led the study. "But we didn't expect this." [BBC News]

in the Proceedings of the Royal Society B. They gathered 160 of the birds

and broke them up into four groups that ate food laced with different concentrations of methylmercury. Some ate 0.3 parts per million of mercury, some 0.1, some 0.05, and some none at all.

Birds exposed to any mercury displayed courtship behaviour less often than controls and were also less likely to be approached by females when they did. As the level of mercury exposure increased, so did the degree and persistence of homosexual pairing. Males that engaged in homosexual parings were also less likely to switch partners from year to year, which Frederick says ibises tend to do if they have been unsuccessful in mating during their first breeding season. [Nature]

"Methylmercury [CH3Hg] is the most toxic form" of mercury, the U.S. Geological Survey writes in its briefer about mercury in the environment

. In people, who primarily ingest the compound by eating contaminated fish and wildlife, "it affects the immune system, alters genetic and enzyme systems, and damages the nervous system, including coordination and the senses of touch, taste, and sight." The Everglades

, where the ibises live, possess the year-round warm climate that's ideal for the methylation of elemental mercury into methylmercury, the BBC reports

. Frederick and Jayasena can't say for sure what mechanism underlies mercury's ability to scramble an ibis's sexual preferences. Mercury is known to disrupt hormonal activity, and that may be the key. But sorting out a particular effect is not easy, nor is predicting how it manifests in other species.

Other birds would probably be similarly affected, though both Frederick and Scheuhammer say it's far from clear whether other animal groups would be. In particular, there's no evidence for increased homosexuality in humans resulting from mercury poisoning, despite several long-term studies. "If the effect was as strong in humans as in the ibises, they'd have found it," Frederick says. [New Scientist]

(Did mercury poisoning do in the famous astronomer?) 80beats: Just How Toxic Is That Hungarian Sludge?

More From Discover
Health
Scientific Highs And Lows Of Cannabinoids
Health
The Best Times of the Day to Eat, According to Science
Health
Will COVID-19 Need an Annual Vaccine Like the Flu?
Health
10 Science-Backed Ways to Boost Your Brain
Mind
Can Playing Video Games Make You Smarter?
Health
Calorie-Restricted Diets May Not Live Up to the Hype
Recommendations From Our Store
My Science ShopDiscover STEM Kits
My Science ShopDiscover 2022 Calendar
My Science ShopStrange Science
My Science ShopElements Flashcards
Shop Now
Stay Curious
Join
Our List