Previously thought to protect ice shelves, new research hints that meltwater rivers could instead cause their collapse. 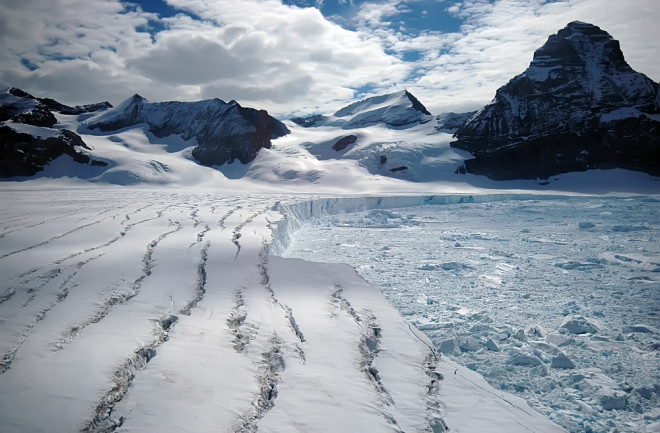 In early 2002, the Larsen B Ice Shelf, a floating ice mass larger than the state of Rhode Island, fractured and collapsed into the ocean off the coast of Antarctica. The shelf remained stable for more than 10,000 years, yet its disintegration took just over a month.

While the event was monumental, it is not likely to be the last. As the climate warms the air and oceans, the fragility of venerable ice shelves around the world will be tested.

Researchers originally thought meltwater rivers protected the ice from collapse, but a recent observation cast doubt on their potential benefits. While rivers might prevent collapse for a while, what would happen when the channel is cut deeper?

"If you somehow cut the ice down to sea level, then maybe the river exits this protective regime and starts to promote fracturing," says Alexandra Boghosian, a postdoctoral research scientist at Lamont-Doherty Earth Observatory.

Even though ice shelves are hundreds of feet thick, their stability relies on the exterior. As the 24-hour summer sun warms the surface, water flows and converges into low points. Some of that water bores down into crevasses, widening and deepening them. Other water collects in lakes, which flex and fracture the ice beneath before draining into the ocean below. While it’s still not clear what causes ice shelves to collapse, meltwater could be important.

"One theory behind the Larsen B collapse is that the drainage of one lake caused a chain-reaction," says Boghosian. "Lake drainage may have created the fractures that shattered the ice."

In 2017, Boghosian and her colleagues found that one ice shelf created a potential solution to this design flaw. The Nansen Ice Shelf in Antarctica possessed an extensive network of surface rivers that deposited meltwater back into the ocean. Pictures of a 400-foot wide waterfall at the terminus of one of these rivers made headlines and proposed the question, could these drainages protect the ice from collapse?

"If meltwater is draining through a channelized network, then maybe it’s not spilling into a crevasse and pushing it open or forming ponds," says Boghosian.

Boghosian’s most recent findings, though, cast doubt on this optimism. While the Nansen Ice Shelf’s surface rivers could have made the ice shelf more stable today, they could also have evolved to undermine its structure.

While researching the Petermann Ice Shelf on the coast of Greenland, Boghosian hoped to observe a similar drainage system to the Nansen Ice Shelf. Using satellite images of a river channel, she attempted to quantify the amount of meltwater that was exported off the Petermann Ice Shelf’s surface. But things weren’t adding up. She noticed on Google Earth that a group of sea ice fragments had collected upstream from the mouth of the river.

"At some point the river had incised down to sea level," says Boghosian. "That’s the first time we could see that it’s probably flowing backwards."

The river on the Petermann Ice Shelf most likely started to drain water into the ocean, just like the waterfall on the Nansen Ice Shelf. But, at some point the channel became so deep that salt water began to flow back upstream — at least some of the time. The downstream portion of this river had become a brackish estuary.

The implications of this transformation are still unknown, but Boghosian observed some worrying signs. Most fractures in ice shelves run parallel to the calving front, where the ice meets the ocean. But the estuary seemed to make fractures flow in the opposite direction. Boghosian saw evidence in historical photos that these fractures had caused large chunks of ice to break away in the past.

Even though these theories are mostly speculative, the climate continues to warm. And knowledge of arctic hydrological processes is important. While few, if any, estuaries like the one on the Petermann Ice Shelf exist on the colder coasts of Antarctica, a warmer climate could change that in the future.

Boghosian hopes to travel to Greenland to collect the first on-site measurements of ice-shelf estuaries, including sound recordings, 3D maps and water samples. As she and her colleagues delve deeper into the mystery of fracturing ice shelves, their findings may alter our models of climate change’s impact on sea level rise.

"We are closer to including ice shelf surface hydrology processes in models than ever before," says Boghosian.