Melting in Part of Antarctica Unprecedented in 1,000 Years 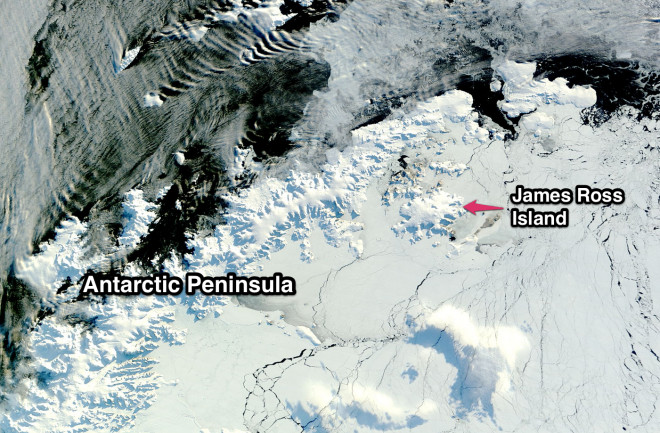 An ice core drilled on James Ross Island off the Antarctic Peninsula reveals that melting in the summer has accelerated dramatically there since the mid-20th century. (Image: NASA) On a clear day in April of last year, NASA's Terra satellite captured this image of the glacier-etched arc of the Antarctic Peninsula. Just shy of the peninsula's very tip is James Ross Island — from where some important new findings about climate change have just come. This part of Antarctica has been warming dramatically in recent years. And now, an ice core drilled on James Ross Island has revealed that summer melting is "at a level that is unprecedented over the past 1,000 years," researchers report in the journal Nature Geoscience. To arrive at their conclusions, the researchers identified visible melt layers in the ice core going back a thousand years. They also reconstructed temperature changes by analyzing chemical fingerprints in the ice (specifically, its deuterium content). Since the late 1400s, the amount of annual snowfall that melted and refroze, known as the "melt intensity," increased tenfold from half a percent to nearly 5 percent, according to the researchers, led by Nerilie Abram of The Australian National University and British Antarctic Survey. Moreover, the warming that the team gleaned from the chemical clues in the ice "occurred in progressive phases since about AD 1460, but intensification of melt is nonlinear, and has largely occurred since the mid-twentieth century," the researchers write. This of course raises an important question: What has been responsible for the warming, and the resulting melting? Research has shown that an atmospheric pressure pattern known as the Southern Annular Mode, or SAM, has played a key role in temperature shifts on the Antarctic Peninsula, especially during summer and autumn. And scientists have theorized that depletion of ozone in the stratosphere (a phenomenon driven by chlorine from human-produced chemicals) has helped to strengthen the SAM in the summer, and the associated warming as well. But Abram and her colleagues say their research suggests that this cannot be a complete explanation. From their paper:

...the mid-twentieth century start for significant warming of the Antarctic Peninsula is too early to be explained by the ozone depletion mechanism alone, and suggests that the early warming was influenced by other factors such as rising greenhouse-gas concentrations or natural variability that has since been reinforced by ozone-depletion-driven circulation changes

All of this important because ice loss from Antarctica and Greenland has been a significant source of sea level rise over the past decade. On the peninsula, that ice loss has come in large measure from the disintegration of giant ice shelves. These shelves float on the water, so by themselves they do not contribute to sea level rise. But they tend to hold back glacial ice flowing off the land. So when they disintegrate, it's like a cork being removed from a bottle of champaign. With the pressure removed, the glacial ice pours out more rapidly into the sea. That's precisely what research reveals has been happening in the Antarctic Peninsula. And increases in melting at the surface, due to warming temperatures, have been implicated. We should expect more of this in coming decades. As the researchers put it, "We conclude that ice on the Antarctic Peninsula is now particularly susceptible to rapid increases in melting and loss in response to relatively small increases in mean temperature."