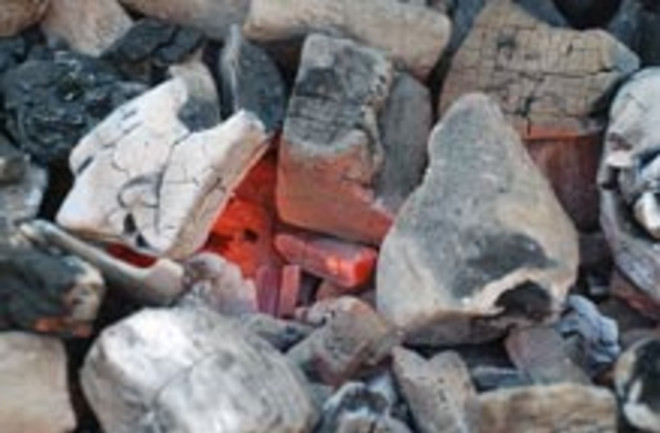 A climate scientist in England has invented a new process for turning wood into charcoal with giant microwaves, and says that the technique may be the best tool humans have for sequestering carbon and slowing global warming. The "biochar" created in the process locks in carbon from the wood, and sequesters it for thousands of years before the charcoal finally decomposes. Biochar received new attention recently when researchers ranked geoengineering schemes based on their ability to slow global warming, and listed biochar as one of the most effective (and cheapest) approaches. The English scientist, Chris Turney, is eager to move from theory to practice, and has founded a company called Carbonscape that

set up a microwave-powered kiln in Blenheim, in New Zealand's South Island, in October last year.... The stove the Carbonscape directors call the Black Phantom can fix up to one tonne of carbon a day [The Australian].

Charcoal is typically produced by slowly heating wood in industrial ovens, but Turney says his microwave process is cleaner and more efficient. The idea

came from a cooking accident when he was a teenager, in which he mistakenly microwaved a potato for 40 minutes and found that the vegetable had turned into charcoal. "Years later when we were talking about carbon sequestration I thought maybe charcoal was the way to go," he said [The Guardian].

Turney says that if biochar operations are adopted across the globe, the

technique could take out billions of tonnes of CO2 from the atmosphere every year. Fast-growing trees such as pine could be "farmed" to act specifically as carbon traps — microwaved, buried and replaced with a fresh crop to do the same thing again [The Guardian].

He notes that traditional methods of producing charcoal convert only 20 to 30 percent of the wood's mass into charcoal, while his process can lock in about 50 percent. There's another upside to biochar: It could also be

tilled into the ground to make soil more fertile. Its porous structure is ideal for trapping nutrients and beneficial micro-organisms that help plants grow. It also improves drainage and can prevent up to 80% of greenhouse gases such as nitrous oxides and methane from escaping from the soil [The Guardian].