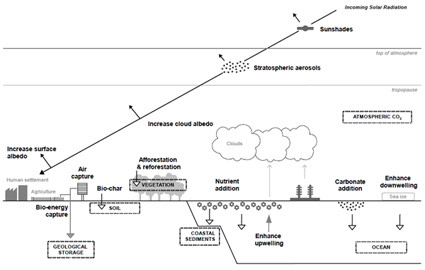 Sunshades in the stratosphere to reflect sunlight away from our planet. Dumping iron into the oceans to encourage algae blooms that would take up carbon dioxide. Painting every rooftop white. These are just a few of the geoengineering schemes that have been suggested to artificially alter the planet's climate and counteract global warming. Now researchers have helpfully ranked 17 proposals on their possible efficacy, saying that it's past time to take a hard look at the ambitious ideas.

"There is a worrying feeling that we're not going to get our act together fast enough," says [coauthor Tim] Lenton, referring to international efforts to limit greenhouse gas emissions. Scientists have reached a "social tipping point" and are starting to wonder which techniques might complement emissions cuts, he says [New Scientist].

The study, published in Atmospheric Chemistry and Physics, didn't include an analysis of costs and environmental impacts. Lenton says there has been too much hype and not enough analysis regarding geoengineering schemes, so he decided to start by asking a straightforward question.

At the most basic level, earth’s surface temperature is governed by a balance between incoming Solar radiation and outgoing terrestrial radiation [Physics World].

The researchers examined how each of the geoengineering schemes would sway that balance, either by reflecting away solar radiation or reducing carbon dioxide that traps heat in the atmosphere. They found that a few proposed technologies could have a planet-wide cooling impact, but say those would be extremely hard to pull off. Some geoengineering techniques rely on increasing the earth’s reflectivity or “albedo." The most dramatic of these ideas--placing sunshades in space or continuously sprinkling sun-blocking particles in the upper atmosphere to mimic the effect of a volcano eruption--could actually cool the planet significantly even if carbon dioxide emissions continue to increase. But these are also the riskiest options, Lenton says, because they require constant (and probably massively expensive) upkeep.

“You are effectively masking the effect of a warming climate system,” Lenton [said], “if we failed to keep the process going – perhaps due to political unrest – we would leave the planet open to the Sun’s full force” [Physics World].

Increasing the planet's albedo through other means, like genetically engineering crops to be more reflective, scattering mirrors across the world's deserts, or painting rooftops white would have only a small impact, the researchers say. And techniques that involve removing carbon dioxide from the atmosphere, like planting trees, capturing and burying emissions from power plants, and fertilizing oceans with iron to spur algae blooms, don't have a fast enough impact to make them worthwhile, Lenton says.

"There's been far too much focus on iron fertilisation" given its lack of potential, says Lenton. His calculations suggest that the boost which agricultural fertilisers inadvertently give ocean plankton in runoff is probably already more effective that iron seeding is ever likely to be [New Scientist].

These findings may be of interest to the researchers who are currently dumping iron into Southern Ocean in an ocean fertilization experiment. One other technique that got a positive review from the researchers was combusted biomass waste, or biochar, which Lenton says could have

"win-win benefits" for the climate as well as for soil fertility. Bio-char, a high-carbon substance that can store CO2 and enhance soil nutrients, is created by heating farm waste or wood in airtight conditions [Reuters].

While its cooling effects can't rival those of a sunshade in space, the technique is cheap and low-tech, researchers note. Related Content: 80beats: Dumping Iron Into the Ocean Might Not Save the Climate, After All 80beats: To Turn Down the Global Thermostat, Plant Crops With Glossier Leaves 80beats: Experiment Trying to Create Algae Bloom Goes Ahead Despite Enviro Fears DISCOVER: 5 Most Radical Ways to Squelch a Climate Crisis (photo gallery) Discoblog: The Softer Side of Climate Control?, which includes biochar DISCOVER: Black Gold of the Amazon, a look at how pre-Columbian South Americans used biochar agriculture