Days earlier, the area around a remote Aleutian volcano was rattled by dozens of smaller quakes, prompting fears of a possible eruption 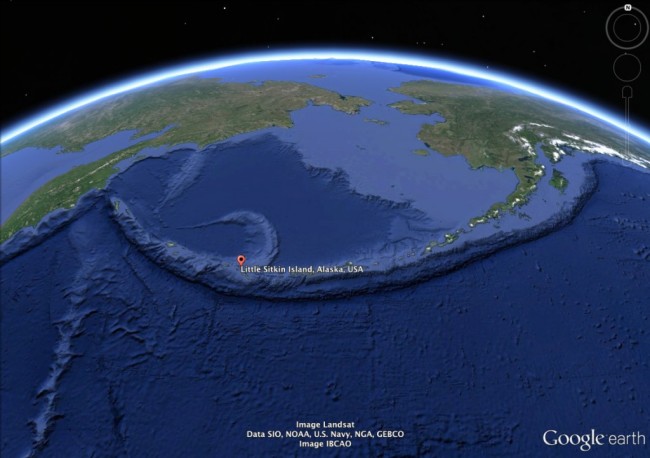 The magnitude 7.9 earthquake that struck Alaska today occurred 15 miles southeast of Little Sitkin Island in the Aleutian chain. (Source: Google Earth) Sixty-seven miles beneath the western Aleutian Islands, a portion of the massive Pacific tectonic plate was straining mightily today to plunge deeper into the Earth's interior — along the arcing seafloor trench seen in the Google Earth image above. And then, at a little before 1 p.m. local time, it suddenly wrenched free, triggering a magnitude 7.9 earthquake that shook the tiny island town of Adak about 200 miles to the East. The temblor caused several minutes of "steady shake and roll," said eyewitness Vince Tutiakoff Jr., quoted in the Alaska Daily News. It also prompted a tsunami warning, which has now been downgraded to a watch by the National Tsunami Warning Center. (But not before the National Weather Service in Anchorage reported that water was seen leaving Adak harbor — often a sign of an impending tsunami.) 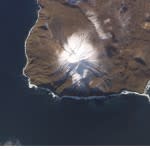 Little Sitkin Island and its volcano. (Source: Alaska Volcano Observatory) The epicenter of the quake was located about 15 miles southeast of Little Sitkin Island, according to the U.S. Geological Survey. Click on the thumbnail image at right to see a photograph of the island and its snow-draped volcano taken by an astronaut aboard the International Space Station in October of 2002. Little Sitkin and the other Aleutian Islands have been built by magma rising up from the mantle and spewing out to form a chain of volcanoes. This happens as the Pacific Plate moves northward and subducts beneath the North America plate. As the Pacific Plate plunges into the Earth, temperature and pressure increase dramatically. This causes water that has been dragged down within the rocks and minerals of the descending plate to be released upward into the material above it. The water, in turn, reduces the melting point of the material, causing it to melt. This magma burns its way upward and spews out to create the Aleutian island chain. (For more detail, see this excellent explanation of subduction zone volcanism.)

Source: Wikimedia Commons All of this takes place in slow motion, of course. The Pacific Plate is "plunging" beneath the North American Plate at a rate of approximately 59 millimeters per year. That's a little over two inches. But it doesn't happen smoothly. It only stands to reason that one massive slab of the Earth's crust cannot glide easily beneath another. So the movement happens in fits and starts all along the island chain. Today, a portion of the subducting slab broke free along a fault, triggering the earthquake. 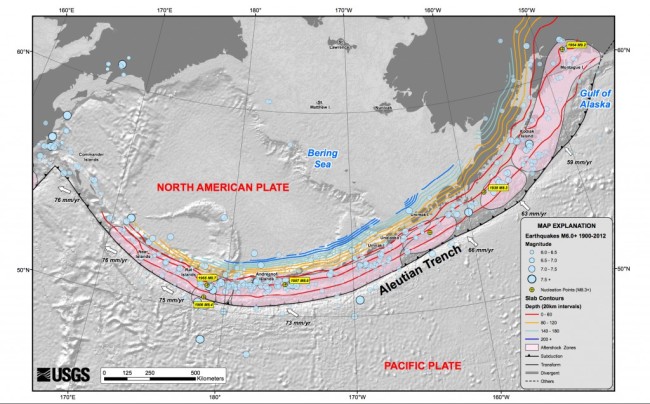 The Aleutian Islands arc for 1,800 miles across the northern Pacific Ocean. This is where the Pacific Plate subducts into the mantle beneath the North America Plate. Today's earthquake (not indicated on this map) occurred not far from the 1965 magnitude 8.7 earthquake in the western part of the island chain. (Source: U.S. Geological Survey Earthquake Hazards Program.) Because of the plate motions, this region is very seismically active, as the map above indicates. Since 1900, 26 events of magnitude 7 or greater have occurred within 250 kilometers of today's quake. According to the USGS:

Interestingly, in a story headlined "Five Active Volcanoes Keeping Alaska Scientists Busy," the Anchorage Daily News reported on June 13 that dozens of small earthquakes had been recorded by monitors in and around the Semisopochnoi volcano in the Western Aleutians. The earthquake swarms were a sign that magma was rising up. But this does not mean that an eruption is imminent. In fact, according to the Anchorage Daily News story, earthquake swarms occurred in 2012 around Little Sitkin Island, and also at Mount Iliamna, but neither resulted in volcanic activity. Even so, earthquake swarms often do presage eruptions — which is why the Alaska Volcano Observatory currently lists Semisopochnoi as being under a volcano alert advisory. This means it "is exhibiting signs of elevated unrest above known background level." Lastly, what's the connection between the earthquake swarms and what happened near Little Sitkin Island today? The answer is simple: subduction. It's happening across the sweeping arc of the Aleutians. That's precisely why they're there.