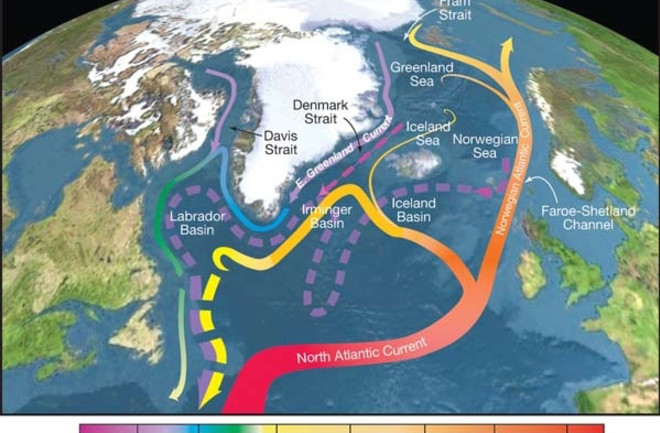 Massive volumes of water circulate throughout the Atlantic Ocean and serve as the central drivers of Earth’s climate. Now researchers have discovered that the heart of this circulation is not where they suspected.

“The general understanding has been [that it’s] in the Labrador Sea, which sits between the Canadian coast and the west side of Greenland,” said Susan Lozier, a physical oceanographer at Duke University in Durham, North Carolina, who led the new research. “What we found instead was that … the bulk [of it] is taking place from the east side of Greenland all the way over to the Scottish shelf.”

Water courses through the Atlantic Ocean in two layers. A shallow layer pulls warm water from the tropics north. This layer, which includes the Gulf Stream, helps keep winters in Western Europe relatively mild. As the warm waters travel to the North Atlantic, they cool and then sink, forming the second layer that spreads south.

This conveyor belt of currents, known as the Atlantic Meridional Overturning Circulation, or AMOC, influences the climate by transporting heat and moving carbon from the atmosphere to the deep ocean. Although its flow is variable, the Intergovernmental Panel on Climate Change predicts the AMOC will slow down in the 21st century. And as the climate warms, the waters at high latitude might not sink, or overturn, as much, slowing the AMOC.

“We’re trying to understand in the years and decades ahead, how sensitive is the overturning to these changes we expect at high latitude,” Lozier said.

That’s why, back in 2007, Lozier initiated the Overturning in the Subpolar North Atlantic Program, or OSNAP, so dubbed thanks to a phrase commonly used by her then 19-year old son. The $32 million, five-year program capitalizes on the expertise of scientists from seven countries in what Lozier calls “an amazing international collaboration.”

In August of 2014, the researchers deployed the OSNAP observation system, a string of instruments that stretch from the Labrador Sea on the Canadian coast to the Scottish shelf, to assess the temperature, flow and salinity of water moving to and from the North Atlantic. After more than 21 months of making measurements, the researchers recovered the array’s first round of data in April of 2016.

The OSNAP array revealed overturning circulation between the southwestern tip of Greenland and the Scottish shelf is about seven times greater than that in the Labrador Sea, the team reports today in the journal Science. Irregular overturning in the area east of Greenland also accounts for 88 percent of the variation in AMOC, the researchers found.

“We want this data then to provide ground truthing to the models because the models are really the only ones that can provide predictions,” said Lozier. “Now they have this benchmark. And if they can match what we see with these OSNAP observations then they’re going to be able to give us better predictions for the years and decades ahead.”