Scientists have different ideas about what's threatening loon survival in some parts of North America. 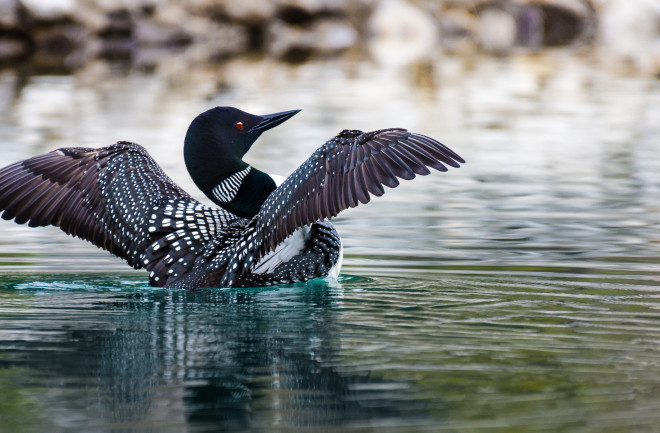 The icons of your summer camping trip are in an unusual situation. Loons — the black and white birds with a distinct and eerie two-note call — spend the warmer months of the year in northern U.S. states and across Canada, returning to the same regional pockets every year to breed. And for some reason, Loons living across New England appear to be thriving, while those in Wisconsin and large parts of Canada are not.

“This is the most complicated thing that you could ever imagine to work on. I mean, this is typical of ecology, right?” says Doug Tozer, a scientist with the Canadian Lakes Loon Survey of Birds Canada. “But this one takes the cake.” As ornithologists sort through the range of possible explanations, they’re weighing the pros and cons of particular research decisions and which struggles are due just to poor luck.

Since 1993, a team of scientists have tracked the lives of loons in about 200 lakes in Oneida County, Wisconsin. Led by Walter Piper, a behavioral ecologist at Chapman University and scientist with the National Loon Center Foundation, the group has recorded behavior, weighed individuals and attached small tracking anklets, or bands, to chicks to see how the long-lived birds develop.

Last year, the team published some disturbing findings. Over 26 years of observations, the number of chicks dropped by 26 percent. Those that survived weighed less from year to year. Slightly older birds were disappearing, too. Loons called “floaters” — those that might not yet be mature enough to mate but hang around, waiting for the opportunity — dropped off by 53 percent over the study.

The disappearance of the Wisconsin floaters has Piper worried. “I'm a bit of a nervous Nellie, but you know, the numbers speak loudly,” he says. “I think there’s justification for being a nervous Nellie.” The floaters keep a loon cohort hatching as many young as they can. Mating loon couples are territorial, and a given lake only hosts so many pairs. When one in a couple dies or gets too old, a floater moves in to reproduce. Despite the drop in floater loons, the number of mating pairs in Oneida County has stayed steady. Eventually, however, floater numbers could get so low, they can’t fill all vacancies. Piper and his team don’t know where that tipping point lies, though they expect it’s coming. “If they fall behind, as our projections indicate they might, then we will slowly lose the pair on Long Lake and then we'll lose the pair on Alva Lake,” Piper says — and so on, eliminating breeding pairs over time.

Tozer remembers reading the paper where Piper and his team explained what they were seeing. “That blew my mind when I read that line, because that’s exactly what we see here in Ontario,” he says. During the annual Canadian Lakes Loon Survey, volunteers survey where the majority of North America’s loons live — about 95 percent of the entire population breeds in Canada. If reproduction rates had stayed at 1980s levels, the average loon parents in Ontario would now be having four young over a five-year span. But that's not what happened: By 2018, that number was down to three. All the while, the number of couples stayed about the same.

Both Piper and Tozer have ideas about what’s hurting loon survival in their respective populations. When traveling south for the winter, Wisconsin and Canadian loons stop in the Great Lakes, water bodies rife with algae blooms and botulism E outbreaks that kill fish and birds. In Wisconsin, the if number of fish available per breeding lake are declining, parents would have less to feed their young. Lead fishing sinkers and jigs, which are still legal in the state, kill off loons that ingest them.

Loon-inhabited lakes in Ontario suffer from high acidity and mercury levels. The heavy metal and the contaminants that make acid rain come from fossil fuel combustion and industrial processes like smelting. Acidic waters foster bacteria that chemically modify mercury to make it more toxic — and Tozer and his colleagues found that lakes in the region with more acidic conditions produced fewer loons.

In the eastern U.S. loon populations appear to have dodged the challenges the birds face elsewhere. The numbers of breeding couples are increasing in some states in the region, says Dave Evers, the executive director of the Biodiversity Research Institute.

New Englander birds luckily never touch the Great Lakes, for one. Additionally, bird-loving Northeasterners have built loon numbers up by protecting breeding areas, moving couples around and providing artificial nesting areas. About 100 to 150 years ago, people in the region shot loons almost out of existence, Evers says. Different states lost local populations entirely. Recovery programs began in the 1970s have had success, so the vitality of the New England population might just seem stronger because prior numbers were so dismal, Evers suggests.

There’s also a chance that the health of New England loons is not what it appears to be. Programs tallying loons throughout the region don't always have as much detail as what Piper, Tozer and others recorded elsewhere, and if they do, the information hasn't come out in academic journals. The analysis of hyper-specific information — like seeing how much chicks weigh, what the water quality is like and how floater populations are doing — allowed researchers to spot troublesome trends. When a breeding area lacks the same degree of precise data analysis as others, it’s hard to tell what’s truly going on. “Unless we get those data pulled together and we're actually looking at demographic parameters like survival rates and reproductive success rates and generating population models, I would say we don't really know," Piper says.

But those northeastern U.S. information gaps could start filling in. Tozer and his colleagues are planning on analyzing Maine reproductive data alongside records of mercury levels in the lakes. There’s a chance the team will find chick numbers are dropping in waters with higher levels of the contaminant. “If we’re right, oh boy,” Tozer says. Lakes can take decades if not longer to see mercury or acidity levels drop. The birds would have to survive the poisoned waters for however long that might take.

Tozer hopes acid and mercury contamination aren’t a problem for New England birds and that he and his colleagues are wrong for thinking these semi-permanent lake conditions are hurting Canadian loons, too. And if some other factor is to blame, at least researchers caught the signs of trouble sooner rather than later. “There’s still tens of thousands of pairs out there,” Tozer says of the loons in Canada. “At least we're not really really in the weeds yet. I mean, we're going to get there, I think, if we don't figure something out fast.”