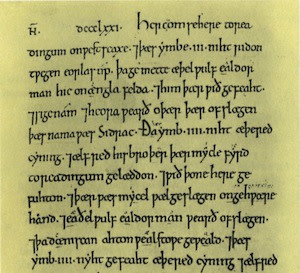 A page from the Anglo-Saxon Chronicle. The entry for 774 AD refers to a "red crucifix" appearing in the sky.

that Japanese trees had preserved a centuries-old spike in the atmosphere’s proportion of carbon-14, apparently caused by a burst of cosmic rays that hit earth between 774 and 775 AD. But that left a perplexing mystery: the most likely source of that excess carbon-14 would be cosmic rays emitted by a supernova. But any supernova powerful enough to generate carbon-14 should have been visible to people alive then, and there was no known record of what should've been a pretty notable event. Enter Jonathon Allen, a polymath undergraduate who majors in biochemistry and also has a deep interest in history. Allen dug around in a contemporary manuscript and found a reference to a "red crucifix" appearing in the sky in 774 AD. This celestial signal may have marked a supernova that birthed the cosmic rays and created the trees’ carbon-14 peak. The Old English Anglo-Saxon Chronicle contains a collection of notable historical events. Although less than a dozen manuscripts survive, the entire text has been uploaded to the Avalon Project

in a modern English translation, and this is where Allen found that in 774 CE (the year that Ethelred became king of the Northumbrians, as the chronicle points out), “This year also appeared in the heavens a red crucifix, after sunset.” Previous interpretations of this manuscript posited that the light display marked an aurora or high-altitude ice particles (see this example of what ice crystals look like

in the atmosphere), but this new evidence suggest it may've been a supernova hidden behind a distant, cosmic dust cloud, which both gave the light its red color and hides the explosion's fall-out from modern astronomers. Although a single chronicle reference is not enough to prove that a supernova caused the signal preserved in trees today, it certainly provides an interesting clue… Ed. note: The headline of this post is wildly anachronistic with respect to how people spoke in the 8th century. We've taken some liberties to get across the feeling of archaic language with words we'd actually understand. If any linguists (armchair or otherwise) out there want to tune up our Old English, be our guest.  [via Nature News