Journalists today are pretty mindful about the terms they use to describe a group of people, especially when referencing ethnicity or religion. In mainstream media, outright slurs are forbidden (though not everyone abides) and anything that smells pejorative is called out. Euphemisms are another matter, as the tortured debate over torture (I mean "enhanced interrogation") attests. The same goes for loaded terms commonly seen in science and technology stories. Take the use of "frankenfish," for example. Last week, after the U.S. Food and Drug Administration (FDA) moved one step closer to approving genetically engineered salmon, many outlets, from the Daily Mail to the Associated Press, used the moniker in their headlines, and nearly all that reported on the news mentioned "frankenfish" somewhere in their stories. In his discussion of the coverage that followed the FDA's announcement, science journalist Paul Raeburn notes (with disapproval) the ubiquity of the "frankenfish" term. Though he praises one Los Angeles Timesstory by Rosie Mestel for its reporting, he also chides:

My only concern with Mestel's story is her use of the loaded and irrelevant term "Frankenfish" to describe the genetically engineered salmon. She doesn't use it herself; she says that's what opponents of genetically modified foods call it. But she shouldn't let them say it. It is meaningless. Frankenfish were not assembled from body parts and brought back to life with a bolt of lightning. The intent of the term is to make the fish sound frightening, which they might or might not be--but calling them Frankenfish does not advance the debate.

He's right. I also share Raeburn's discomfit with the lazy and sensationalistic way editors and reporters have come to rely on "frankenfish" as shorthand to convey multiple meanings in the debate. Still, it's a tricky conundrum for reporters when some terms become part of a discourse's parlance. I had similar misgivings about the use of climate "denier" several years ago and reached out to my peers for guidance. They provided excellent perspective and reinforced my own disinclination to use the "denier" term when referring to those who don't accept the consensus scientific opinion on climate change. But anyone who follows the global warming debate knows that climate "denier" has become part of the vernacular across a wide spectrum of society. The term is casually thrown around by politicians, activists, scientists, and journalists. I suspect that when it comes to the use of "frankenfish, I and others, like Paul Raeburn, will be swimming upstream. Meanwhile, has anyone seen this 2004 horror movie? 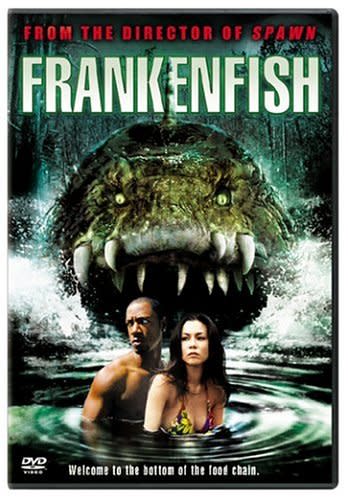