Look at This: Enormous Whales Have Enormous (and Interesting) Poop

That's a lot of poop. 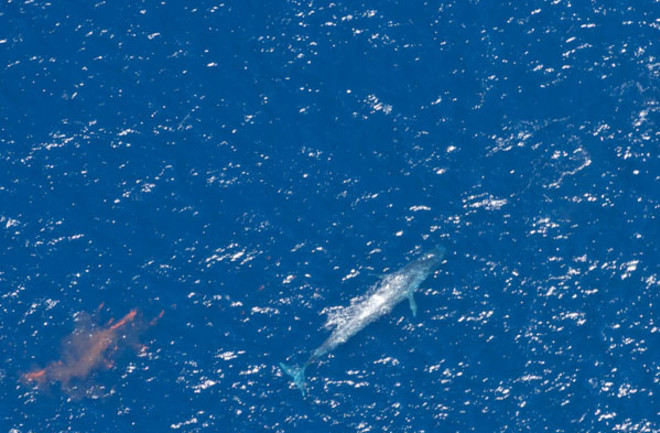 Blue whales, the largest animals on Earth, can eat about four tons of food a day — and when they're done digesting, there's still a whole lot of stuff left over. This aerial shot, taken by oceanographic consultant Eddie Kisfaludy off the Southern California coast, shows a blue whale and a truly enormous plume of its poop, the same vibrant orange as the krill on which the whales feed.

Whale feces, it turns out, plays a substantial role in ocean ecosystems. Since it floats to the surface, it brings nitrogen whales have taken in when they fed in the ocean's depths to shallow waters, providing a much-needed nutrient for plankton there. The massive mammals' poop also serves as a significant carbon sink; one study estimated that excrement from sperm whales in the Southern Ocean alone sequestered 400,000 tons of carbon dioxide a year.

Researchers who study whales have found the feces fertile ground for scientific inquiry, analyzing its makeup to determine what the animals are eating, where they've been, and even whether they're stressed out. As for how these curious scientists locate their research material in the open ocean: They've trained dogs to sniff it out from as far as a mile away.