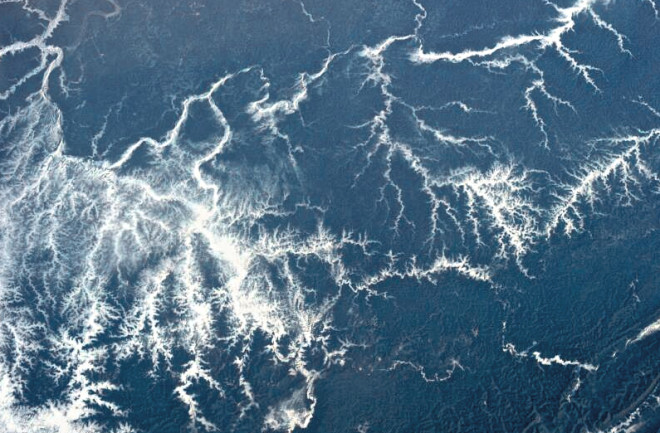 Astronaut Karen L. Nyberg shot this photo on Sept. 27 from her perch aboard the International Space Station. (Photograph: Karen L. Nyberg/NASA) When I first spotted this striking image in Karen L. Nyberg's Twitter feed from the International Space Station, the word "LIGHTNING" burst across my brain. I knew it actually was not, because the caption said plainly that what I was looking at was fog filling the river valleys of Ohio and West Virginia. Even so, the resemblance is uncanny. And the image itself is a terrific example of Earth art. Let's call it "fractal fog." Just as an aside, I wanted to provide a satellite image showing the same phenomenon. But I learned to my dismay that the federal government, including NASA, has largely disappeared from the Web due to the government shut down. I'm guessing this is unprecedented. In any case, rivers can form fractal patterns — meaning they are self-similar across different scales. I recently posted some of my own photos illustrating fractal patterns in the rivulets and sediments left behind after a creek near where I live flooded and then subsided. Now, with this image, we can see fractals repeating themselves at much larger scales, thanks to the bright white fog that fills the drainages and thereby stands out so starkly against the dark, vegetated surrounding landscape. And what about that fog? It's classic valley fog — a not uncommon phenomenon in the autumn, when moisture in the atmosphere can still be relatively high but temperatures at night can cool dramatically. With that cooling during lengthening autumn nights, colder air is denser than warmer air above and tends to flow downhill into river valleys. With enough cooling, the dew point is reached, and water vapor condenses into fog. Meanwhile, the downward sinking of the air tends to confine the fog to the valleys. Lastly, a note about the image: From the looks of it, Karen Nyberg did minimal processing before posting it to Twitter. I brought it into Aperture, my photo management application, and increased both the overall and mid contrast. I also increased definition, or micro-contrast. These changes helped overcome some of loss of detail that was notable in the original. They also enhanced the fractal patterns.