Let's Take a Walk Through the Science of Walking 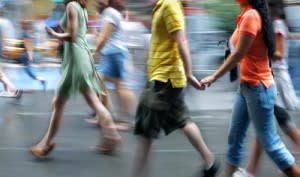 Walk through a crowded city and you're making dozens of instinctive choices: swerve to avoid the guy staring at his Blackberry, walk around those subway grates, speed up so you don't walk side by side with a stranger, and on and on. While pedestrians aren't usually thinking too hard about these decisions, scientists are. Over at Slate, Tom Vanderbilt has a four-part series

on the history, the science, and the future of walking in American. In part two, about the science of walking, Vanderbilt profiles a company that models how people walk with mathematics:

The Legion model seeks to understand, with each step the pedestrian takes, what their next step will be, based on a mathematically weighted combination of three factors (the tolerance for, and wish to avoid, inconvenience, frustration, and discomfort). More minor things are often observed—people pausing briefly in London before exiting a transit station to see if it’s raining—but not fully modeled yet. (Plottner [Legion's VP] notes the company already has some 9 million pedestrian measurements.) Getting large crowds of people to move smoothly often involves negating people’s own natural inclinations. In London, or in Chinese cities, he notes, it is common to see a long railing at the bottom of pairs of escalators. “It forces you to take a few extra steps,” he says. “Every time we turn, we’re always trying to cut the corner, always trying to get a leg up on that other person. This removes the conflict area from the base of the escalator.” Similarly, Legion’s models for sports stadiums and other large facilities often show circular switchbacks in staircases can handle more people than square. “People are better about following the outline of the wall,” says Plottner. “They don’t feel like it’s causing them extra work.

Many of these little gems about how we walk are so intuitively satisfying because we know them to be true---we just never really think about them when walking. Read the entire series

for more enlightening tidbits including some counterintuitive ones, such as how escalator walking has been banned in Japan because it actually makes escalators less efficient.