When the definitive history of the GMO debate is written, Jeffrey Smith is going to figure prominently in the section on pseudoscience. He is the equivalent of an anti-vaccine leader, someone who is quite successful in spreading fear and false information. (As David Gorski at the Science-based Medicine blog has noted, the anti-vaccine and anti-GMO movements are two birds of the same feather.) The Academics Review blog writes of Smith:

His self-published books Seeds of Deception and Genetic Roulette have built for him an online profile that has made Smith one of the most widely quoted opponents of biotech ag —despite his evident lack of scientific credentials or other formal training on the subject.

It appears that the education he gained at Maharishi university has been put to good use. Here he is demonstrating "yogic flying" in 1996.

This passage from Smith's Wikipedia bio seems a fair representation of him: 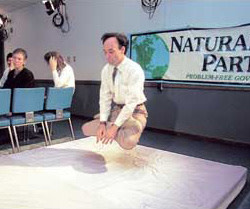 A variety of American organic food companies see Smith "as a champion for their interests", and Smith's supporters describe him as "arguably the world's foremost expert on the topic of genetically modified foods". Michael Specter, writing in The New Yorker, reported that Smith was presented as a "scientist" on The Dr. Oz Show although he lacks any scientific experience or relevant qualifications. Bruce Chassy, a molecular biologist and food scientist, wrote to the show arguing that Smith's "only professional experience prior to taking up his crusade against biotechnology is as a ballroom-dance teacher, yogic flying instructor, and political candidate for the Maharishi cult’s natural-law party." The director of the Organic Consumers Association says Smith is "respected as a public educator on GMOs" while "supporters of biotechnology" have described him as "misinformed and misleading" and as "an activist with no scientific or medical background" who is known for his "near-hysterical criticism of biotech foods."

As Jon Entine wrote at Forbes, what galls scientists the most is that Smith has been presented as a GMO expert to millions of TV viewers. Liberals and environmentalists who put a premium on science should be equally galled that Smith is treated as a credible source. When it comes to GMOs, though, many seem to take even the most outlandish claims at face value, including some journalists, as I recently pointed out. It amazes me when otherwise smart people are quick to trump a story or supposed finding that, for example, links an herbicide to "a great number of the diseases and conditions that are prevalent in the modern industrialized world." Such a recent paper, as one person hilariously said on Twitter, "reads like it was scribbled on Glenn Beck's chalkboard." Perhaps you're wondering what those scribblings might sound like when explained on a video? Lucky you, the co-author of the aforementioned paper recently sat down with none other than Jeffrey Smith to discuss how GMOs and a "Darth Vader chemical" are poisoning humanity. I hereby give you a one-stop shop of crazy talk. GMOs and the autism connection:

Connecting the dots on GMOs and obesity:

There are also clips discussing how GMOs are causing heart disease and diabetes. These are the kind of people that fuel the worst kind of fear-mongering about biotechnology, and unfortunately, what they say is taken seriously by foodies, environmentalists, popular talk show hosts and some mainstream journalists. So long as Jeffrey Smith is treated by the media and influentials as a go-to source on biotechnology, the public debate on genetically modified foods will remain mired in loony land.