Latest Report: El Niño Continues to Bulk Up in the Pacific — and It May Get a Boost From the Pacific's Surge of Cyclones 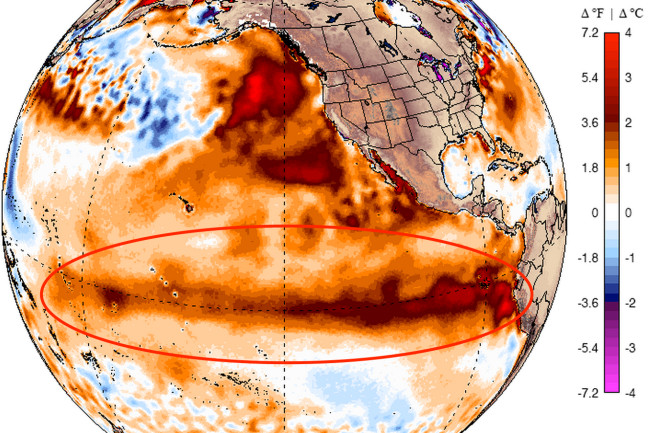 The forecast for how sea surface temperatures would vary from normal in the Pacific Ocean on July 9, 2015. The circled area of abnormally warm water is a hallmark of El Niño. (Source: ClimateReanlyzer.org/Climate Change Institute, University of Maine) The El Niño once regarded as "El Wimpo" is getting ever stronger, and it's likely to peak in late fall or early winter as one of the more brawny ones on record. "At this time, the forecaster consensus is in favor of a significant El Niño event," states the monthly assessment from the U.S. Climate Prediction Center, released today. "Overall, there is a greater than 90% chance that El Niño will continue through Northern Hemisphere winter 2015-16, and around an 80% chance it will last into early spring 2016," according to the report.

Abnormally warm surface waters concentrated mostly east of the dateline in the Pacific are a hallmark of El Niño. You can see just that in the graphic at the top of this post. That band of orange and red along the equator that I've circled is indicative of surface waters that are more than five degrees F warmer than normal in places. This warmth has contributed to a burst of intense cyclone activity in the tropical Pacific. And that activity may actually help El Niño bulk up even more.

Typhoons Chan-hom (left) and Nangka (right) swirl in the western Pacific Ocean in this animation of visible and infrared satellite images acquired on July 9, 2015. El Niño conditions have contributed to a sharp surge in cyclone activity, which in turn may help El Niño get stronger. (Source: Cooperative Institute for Meteorological Satellite Studies) Let's talk about that burst first. This week, three typhoons have swirled in the western Pacific basin simultaneously, marking the first time that has happened in more than 20 years, according to Eric Blake, a hurricane specialist with the National Hurricane Center. One of the three, Linfa, came ashore in southeastern China today as a severe tropical storm. Typhoon Chan-hom, which lashed Okinawa today with high winds and bands of heavy rainfall, is probably headed for landfall in eastern China on Saturday, possibly as a strong typhoon. If it maintains its current forecast track, Chan-hom will pose a significant risk of flooding in the megalopolis of Shanghai. https://twitter.com/AriWeather/status/619144644727840768 To the east, winds from Super Typhoon Nangka reached an estimated 155 miles per hour today, making it the equivalent of a strong Category 4 storm on the Saffir-Simpson Hurricane Wind Scale. It could pose a risk to mainland Japan next week. Near Hawaii, we also have Tropical Storm Ela, which is forecast to skirt a bit north of the island chain over the next few days. And that's not all! Two disturbances in the eastern Pacific are now likely to develop into tropical cyclones over the next five days, according to the National Hurricane Center. This surge in cyclones is happening after a six week lull. What happened? Weather, actually. Here's the big picture: Ordinarily, the trade winds that girdle the equator blow from east to west. These easterlies tend to cause warm surface waters to pile up in the western part of the Pacific Ocean basin. But as an El Niño gathers strength, the trade winds tend to slacken. And sometimes the winds even reverse in intense bursts of westerly winds. This allows warm surface waters to spread east, toward South America. (Have a glance at the graphic at the top of this post again, and you'll see lots of warm surface water piled up against South America.) That's what was happening in the Pacific — until early June. At that point, the trade winds regained some of their strength, thanks to something called the Madden-Julian Oscillation. The MJO is a region of enhanced storminess that travels around the world from west to east along the equator.

Source: NOAA ENSO Blog Early in June, the MJO's enhanced storminess was over the Indian Ocean. Here, air currents rose high into the atmosphere in vigorous convection cells. Click on the thumbnail graphic at right for an illustration that shows how this worked. As you can see from the diagram, while enhanced storminess and rising air lingered over the Indian Ocean, the opposite was happening to the east over the Pacific: air was sinking. This tended to suppress storminess — thereby contributing to a lull in cyclone formation. But then the MJO cycle brought the area of enhanced storminess to the Pacific Ocean basin. Thanks to the change in wind circulation patterns that came with it, westerly wind bursts that had been suppressed earlier in the month were now unleashed, helping to lead to further strengthening of El Niño. At that point, all the ingredients were in place for nature to cook up a big stew of tropical cyclones in the Pacific: warm El Niño surface waters, westerly winds characteristic of El Niño, and lots of air rising in towering thunderstorms. And now, those cyclones are expected to enhance El Niño conditions even further. It gets back to those westerly wind bursts (which, remember, run opposite to the trade winds). Here's how, according to the latest assessment by the Australian Bureau of Meteorology, published two days ago:

The 2015 El Niño is likely to strengthen in the coming weeks, largely due to recent tropical cyclone activity. Several tropical cyclones, including a rare July cyclone in the southern hemisphere, have resulted in a strong reversal of trade winds near the equator. This is likely to increase temperatures below the surface of the tropical Pacific Ocean, which may in turn raise sea surface temperatures further in the coming months.

You can see that strong reversal in the trade winds — returning to a typical El Niño pattern — in this diagram from a post today in NOAA's fascinating ENSO blog:

Difference from average near-surface winds in the tropical Pacific (120°E to 80°W). Each row in the plot is the daily average wind anomaly from January (top) through early July 2015 (bottom). The stronger-than-average easterly winds caused by the MJO in early June first show up as a light blue area (circled). Over the next two weeks, the blue area moves east, sloping toward the bottom right of the image. (Source: NOAA ENSO Blog) The horizontal axis in the diagram above shows degrees of latitude. The vertical axis shows time, starting with January at the top and ending in early July at the bottom. And the colors correspond to wind anomalies — how the winds varied from average — near the surface of the Earth. Two bursts of westerly winds occurred in the first half of March and first half of May, consistent with El Niño. But then the blue area circled in early June shows the effect of the MJO phenomenon: The easterly trade winds regained strength temporarily. As the MJO's enhanced storminess reached the Pacific in late June, it helped kick up a really big burst of westerly winds centered at around 160E. That stirred the pot of typhoon stew. The result: El Niño is intensifying — and we could be headed for a very strong event in the months ahead. Or as Michael McPhaden, a senior scientist with the U.S. National Oceanic and Atmospheric Administration, puts it (as quoted in the Sydney Morning Herald):

All the elements are in place for a major El Nino this year and the latest westerly wind burst will hit the accelerator on further warming . . . Based on what we've seen so far in 2015, this event could shape up to be as big as the 1997-98 and 1982-83 El Ninos, which were the strongest on record."

For the sake of drought relief, I hope El Niño doesn't wind up defying these predictions by petering out. But that's a whole different story — which I'll write at another time!