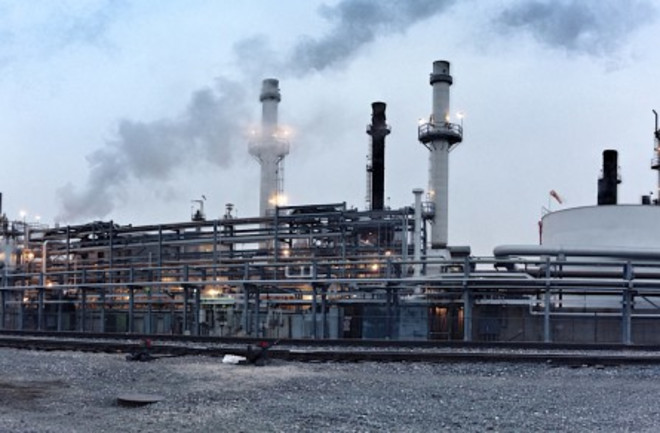 The Suncor refinery in Commerce City near Denver, Colorado. (iPhone photomosaic: © Tom Yulsman) If humanity is to avoid dangerous impacts from climate change, we're going to have to do something that seems almost unthinkable: walk away from the massive riches of fossil fuels still left in the ground. For me, that's the key message of the latest report by the Intergovernmental Panel on Climate Change, released yesterday. The problem, of course, is that right now the world is headed in precisely the opposite direction. While U.S. energy-related emissions of carbon dioxide were about 10 percent lower in 2013 than they were at their peak in 2007, and European nations are struggling to reduce their own emissions, huge growth in the developing world is helping to push anthropogenic emissions of CO2 ever higher. Thanks to all of the carbon that the developing world has pumped into the atmosphere since the dawn of the industrial age, and the rising amounts from fast-growing nations like China, India and Brazil, climate impacts are already being felt around the world. As the IPCC put it:

Human influence on the climate system is clear, and recent anthropogenic emissions of greenhouse gases are the highest in history. Recent climate changes have had widespread impacts on human and natural systems.

The coast of Southwest Greenland as seen from a passenger jet on Nov. 1, 2014. (Photo: © Tom Yulsman) So it will take a dramatic change in course to prevent further climate impact. Already, these include warming of the atmosphere and oceans, changes to the global water cycle, melting of snow and ice (including the ice sheet in Greenland, seen in the photo at right), and rising sea level. If emissions continue unabated, risks of other kinds of impacts will rise as well. One of the most troubling could be impacts on agriculture. Already, climate change has slowed gains in the productivity of some crops, according to the IPCC. (For more about that, please make sure to read my climate story in Discover's upcoming Year in Science issue.) To limit dangerous interference in the climate system, governments around the world have agreed to limiting the rise in global average temperature to less than 3.6 degrees Fahrenheit, or 2 degrees Celsius, above the preindustrial level. To meet that goal, the IPCC says new emissions of carbon dioxide from fossil fuel burning must not exceed 1 trillion tons. To put that number in perspective, consider that total fossil fuel reserves contain about 4 trillion to 7 trillion tons of carbon, according to the IPCC. And fossil fuel companies are spending about $600 billion every year to find even more. Nowhere is that feverish effort more obvious than along Colorado's high plains not far from where I live. Oil production is booming here at the foot of the Front Range. Weld County alone, about a 45 minute drive northeast of Denver, has experienced a 34 percent increase in oil production in less than one year. As the Greeley Tribune put it a little over a week ago:

Total crude production across the state — of which Weld County is responsible for about 82 percent and growing — is headed toward last year’s record production, according to numbers from the Colorado Oil and Gas Conservation Commission. But analysts believe crude oil coming out of the Denver-Julesburg Basin will continue to topple historic flows and even double in the next five years.

Denver has been described as the Houston of the Rockies, a town that's booming thanks in no small measure to fossil fuel companies that have set up shop here. We've even got our own large, odoriferous refinery that transforms 98,000 barrels of oil every day into gasoline, diesel fuel and paving-grade asphalt. Don't get me wrong. I know that for now we are dependent on those products, and that they are helping to drive economic growth here in Colorado. But if what the IPCC reported yesterday is true, we've got to get more serious about bringing on alternative energy sources quickly — and to steel ourselves for the necessity of walking away from the vast majority of the fossil fuel riches still left in the ground.