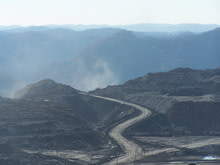 The decision to revoke the permit for Arch Coal Inc.'s Spruce Mine No. 1 in West Virginia's rural Logan County marks the first time the EPA has withdrawn a water permit for a mining project that had previously been issued. It's also only the second time in the 39-year history of the federal Clean Water Act that the agency has canceled a water permit for a project of any kind after it was issued, according to the agency. [Wall Street Journal]

The mine, located south of the West Virginia capital of Charleston, has been fighting to begin operation for more than a dozen years.

The Obama EPA began looking more closely at the Spruce Mine in September 2009. But debate over the proposed operation dates back to the late 1990s, when then-U.S. District Judge Charles H. Haden II issued an injunction that blocked the mine, which then was proposed for more than 3,000 acres. After the Haden ruling, the company reduced the size of its proposal and the operation underwent much more intense scrutiny, in the form of a full-blown Environmental Impact Statement by the Corps of Engineers, which approved the new mining configuration in January 2007 [Charleston Gazette].

EPA, however, says that evidence gathered since that 2007 permit (issued under the more lax Bush administration EPA) shows that the mine would cause enough damage to the streams, watershed, and habitat in the area to prevent it from passing the Clean Water Act's muster. We already knew the Obama EPA

would be discriminating in allowing any new mountaintop removal mines. But now that EPA has taken the rare step of revoking a permit, are other such already-permitted projects in danger of losing their right to operate?

The EPA's decision could affect dozens of other mining projects across Appalachia, where firms have been blasting the peaks off mountains for years to reach coal seams and then depositing the remaining rubble in surrounding valleys. While the federal government issued permits for hundreds of these activities under the Clinton and George W. Bush administrations, the EPA adopted new environmental guidelines in April and is now reviewing 33 other pending permits. [Washington Post]