Lake Michigan Itself Is the Greatest Asian Carp Deterrent 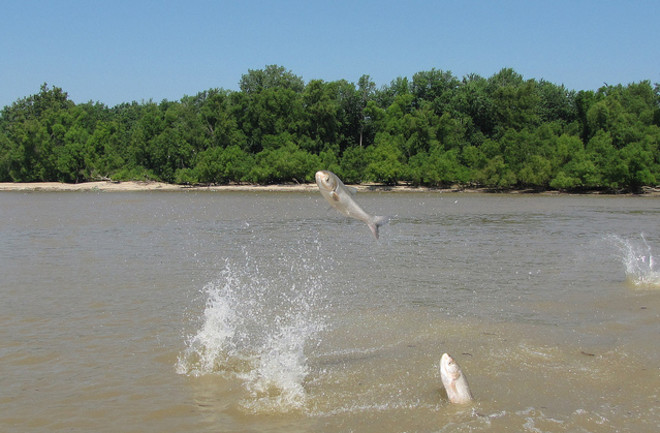 Asian carp jump from the water at the mouth of the Wabash River in Ohio. (Credit: U.S. Army Corps of Engineers/Todd Davis)

For years, people have been freaking out that Asian carp are about to invade the Great Lakes.

That concern seemed more real than ever this summer after an Illinois fisherman caught a carp in June less than 10 miles from Lake Michigan — beyond the barriers designed to keep them out.

These voracious fish have already decimated Midwestern rivers. They’re filter feeders who feast on plankton — the tiny plants and critters that prop up foodchains. And they eat lots of them. Adult Asian carp eat pounds of the stuff every day.

Carp are also a little creepy; so they’ve captivated the public’s attention. They spawn in startling numbers, and they’re notorious for all leaping from the water at once, smacking their slimy fish bodies into innocent boaters.

It’s easy to see why conservationists and government agencies are concerned.

“Asian carp are kind of the perfect poster child for invasive species,” says Molly Flanagan, vice president for policy at the Alliance for the Great Lakes. “The silver carp jump and they’re scary — they hurt people. The bighead carp eat a lot.”

And in August, the government finally released its long-awaited $275 million plan to stop carp from reaching the Great Lakes. The Army Corps of Engineers’ so-called “Brandon Road plan” would install electric barriers at a lock and dam near Joliet, Illinois. Underwater speakers would sonically blast the fish as additional deterrent.

Both Republicans and Democrats from neighboring states have supported taking action against carp in hopes of protecting the Great Lakes’ sport fishing industry. But Flanagan says the Trump administration held the study back at the urging of industry groups like shipping companies, who have barges on the waterway.

“What they’re worried about is delays,” she says. “If they have to lock a dam every time they go upriver, how much time is that going to add to their journey?”

But surprisingly, when you ask veteran Great Lakes ecologists about the dreaded carp reaching Lake Michigan, you’ll often be met with groans.

Those groans stem from a reality that’s even more horrifying than carp: There’s little left in Lake Michigan to devastate. Other invasives—mostly quagga mussels—have already stripped the lake of its food. Rather than invade Lake Michigan, ravenous carp swimming in the canal might turn back around once they reach the nutrient-poor environment in the lake.

Like carp, the mussels love plankton. And quagga mussels now number in the trillions. Along the lake bottom—stretching more than 100 miles from eastern to western shore—there’s a virtually unbroken bed of filter feeders that has sucked the life from Lake Michigan. Carmen Aguilar of the University of Wisconsin-Milwaukee is an expert on how invasives affect the Great Lakes’ food chain. She says quagga mussels can filter the whole system once roughly once every four days.

“You have desert water from Lake Michigan—water with virtually no food in it—heading toward the Mississippi River,” says fisheries ecologist John Janssen, also of the University of Wisconsin-Milwaukee. “That water will get greener and greener as it heads towards the Mississippi.”

Why is the water better fertilized farther south? Poop. Or, as Janssen puts it “incomplete processing of sewage in Chicago.”

“So, if you imagine yourself as an Asian carp which need the phytoplankton — they need huge amounts of it to survive—what they’re doing swimming up that canal is they’re getting into a desert more and more,” Janssen continues. “And they’re gonna turn around.”

He says he can’t guarantee no carp will make it into Lake Michigan. But, if they do, they’d have a hard time reproducing or even surviving far from city shorelines in the open lakes.

But for Flanagan, the Brandon Road “let’s-electrocute-all-the-carp-plan” is about much more. There are now some 180 invasives in the Great Lakes.

“This isn’t just Asian carp,” Flanagan says. “What we have in the Chicago area waterway system is essentially an invasive species superhighway. It’s a continuous connection between the Great Lakes Basin and the Mississippi River Basin.”

The goal of conservationists is to put a roadblock on that highway.

“Asian carp are the easiest way to get other people interested in potentially doing any of that work,” Flanagan says.