There's a good chance the weather-disrupting phenomenon will persist for a rare third year, possibly exacerbating already severe drought in the U.S. West. 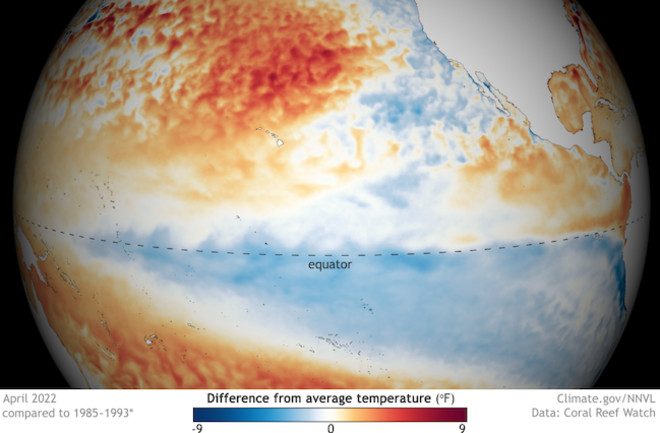 For two winters in a row, La Niña has steered desperately needed rain and snow storms away from the U.S. Southwest, exacerbating a decades-long drought that has shriveled reservoirs and spurred horrific wildfires.

Now, hopes that the climate pattern would relent and allow moisture to rebound next winter have suffered a serious blow.

La Niña — Spanish for "the girl" — persisted through April, and there's a 61 percent chance she'll stick around for a third winter, according to the latest monthly update from the National Oceanic and Atmospheric Administration.

The monthly evolution of sea surface temperatures between Jan of 2020 and May of 2022 is seen in this animation focusing on the tropical Pacific. Neutral conditions are present at the start of the animation. Blue colors indicative of cooler than average temperatures begin to spread along the equator, with the La Niña threshold reached in August of 2020. La Niña dissipates in April of 2021 only to re-emerge this past fall, continuing through the end of the animation. (Credit: Images from Climate.gov. Animation by Tom Yulsman)

La Niña, characterized by cooler-than-average sea surface temperatures in the tropical Pacific Ocean, disrupts weather patterns across a large part of the globe. For North America, winter storms approaching from the Pacific tend to come ashore farther north than usual, soaking the Pacific Northwest and leaving the U.S. Southwest dryer than usual.

When La Niña emerged in August of 2020, the North American Monsoon had already failed, and summer in the Southwest was on its way to being the driest and hottest on record. Come winter, La Niña made things even worse, resulting in paltry precipitation and then an early melt out of snowpack, from California to Colorado.

Although La Niña dissipated in April of 2021, it reemerged last fall. Barring countervailing climatic factors, if it continues into a third winter, an already grave situation could get even worse.

That's especially true for the Colorado River Basin, where more than 40 million people depend on winter storms to build up mountain snowpack — source of spring runoff that replenishes reservoirs. But thanks to an epochal megadrought, made worse by two La Niña episodes in a row, the two largest reservoirs in the Untied States, Lake Mead and Lake Powell along the Colorado River, are at record low levels.

And now they're set to drop even lower.

This spring, thanks in large measure to warm temperatures and scant precipitation, runoff is expected to be paltry — and that's putting it mildly. According to an estimate issued last week by the Colorado Basin River Forecast Center, the flow of water into Lake Powell in coming weeks is likely to be just 55 percent average.

Runoff of mountain snowpack meltwater into streams and rivers of the Colorado River Basin is estimated to be uniformly below average through July. (Credit: Colorado Basin River Forecast Center)

It may seem counterintuitive that warm temperatures — which cause premature melting of snow — would reduce rather than increase runoff. But here's how that happens:

A premature thaw exposes the ground earlier than usual to solar radiation and warmth. That causes increased evaporation of water, thereby leaving less to run off into streams and rivers. Moreover, with earlier and warmer temperatures, plants lose more moisture to the atmosphere (through a process called evapotranspiration), causing them to draw more from the soil.

Persistent drought has already left soils and vegetation quite dry, so they greedily consume as much spring meltwater as they can. And that further reduces how much runoff ultimately makes it into waterways.

None of this has been surprising for Brad Udall, Senior Water and Climate Research Scientist at Colorado State University. He has documented this phenomenon of "hot drought," made increasingly worse a climate that's warming due to our emissions of greenhouse gases.

"The decline in runoff is what many of us have predicted to occur for some time," he says. "And runoff, unfortunately, is likely to decline even more as it continues to warm."

An aerial photograph shows the Glen Canyon Dam and Lake Powell on October 12, 2020. The white "bathtub ring" along the shore of the lake has been left behind by the dropping level of the reservoir. Levels today are much lower than they were when this photo was taken. (Credit: Waterdesk.org / Lighthawk.org)

Projections of paltry runoff already have prompted the federal government to plan on tightening the Glen Canyon Dam's spigot in coming weeks. This will significantly reduce the amount of water flowing downstream from Lake Powell to Lake Mead — which will shrivel even more as a result.

Dropping reservoir levels have also forced significant cuts in water deliveries to farmers — with more likely on the way by August.

As the reservoirs have been falling, much effort has gone into planning for contingencies like this. “And what we’re finding out, unfortunately, is that these plans are turning out to be completely inadequate," according to Udall.

In response to questions I emailed him back in April, he emphasized that "we can stop these flow declines, if we choose.  We have almost all the technology, and all the policy tools we need to change course."

"For that to occur," he wrote, "we’d need a healthy, fully functioning democracy which would make decisions based on facts and science. Alas, we don’t have that. If we don’t stop these flow declines, water managers throughout the American West will be forced into making enormously painful decisions about how we are going to allocate our greatly diminished water supplies. Some current users are going to get completely wiped out, and others will get less water. There will be no winners out of the reallocation  – only losers who lose less, and losers who lose everything."