Kangaroo: It's What's for Dinner in Australia 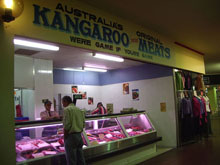 Hungry for a kanga-burger? Replacing beef and mutton with kangaroo meat could significantly cut down on ruminant livestock emissions, according to a new report commissioned by the Australian government. Bovine belching is a massive source of methane emissions. But while a single cow can produce 300 to 500 liters of methane gas per day— enough to inflate 80 party balloons—kangaroos produce almost none.In other words, if cattle were Hummers, kangaroos would be Priuses.

As we’ve reported previously, Australian scientists have tried to fix the problem by transferring digestive bacteria from kangaroos into the guts of livestock.But this new report suggests that switching right to kangaroo meat could be a better move.

A potential model cited by the report would replace 7 million sheep and 36 million cattle with 175 million kangaroos by 2020, allowing Australia to cut about 16 megatons of carbon emissions every year. As the price of emission permits increases, kangaroo harvesting would become a lot cheaper than livestock farming.Kangaroos are hardier than livestock, and could better handle the effects of climate change like decreased water supply.They would be the ideal free range animal and yield meat that is high in protein and low in fat.

Still, there’s the 175 million kangaroo question: Will anyone eat it?

Australia’s Food Companion magazine thought the name may be the key factor in selling kangaroo to consumers. So in 2005, they held a naming contest to pick a more palatable title.Here are a few entries we liked: kangarly, maroo, marsupan, jumpmeat, or MOM (meat of marsupials).

Out of over 2,700 entries, the winning name was australus, though the Kangaroo Industry Association of Australia has yet to adopt it officially.