Just in time for Valentine's Day, the ocean and atmosphere have coupled — giving birth to a weakling El Niño 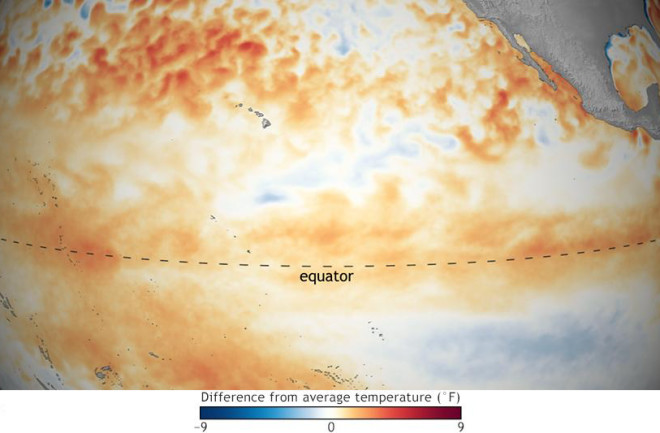 Warm conditions along the equator in the Pacific Ocean in January are characteristic of El Niño. (Source: NOAA) It's finally here. This morning, the National Oceanic and Atmospheric Administration made it official: El Niño conditions are present in the tropical Pacific Ocean. There's a 90 percent chance that they'll continue through winter, and a 60 percent chance through spring. True to predictions, this El Niño is a weakling. Climate scientist Emily Becker summarized the situation at the ever-awesome ENSO blog:

After several months of flirting, the tropical Pacific ocean and atmosphere appear to have coupled just in time for Valentine’s Day and now meet the criteria for El Niño conditions. Is it true love? Time will tell, but forecasters expect weak El Niño conditions to persist through the spring.

For an El Niño to be declared, the ocean and atmosphere have to get it together. Warmer-than-average waters along the equator in the central and eastern Pacific should warm the overlying air. This, in turn, should cause moisture-laden air to rise, forming clouds and leading to rainfall. "So much more rising air, in fact, that the entire circulation over the equatorial Pacific—the Walker circulation—is changed," Becker explains. But for several months, the atmospheric circulation remained cool to the entreaties of the ocean — until January. And so now, El Niño has been born. But temperatures in the area that's key to an El Niño declaration (it's called the "Niño3.4" region) are just slightly above the threshold needed for an El Niño declaration. And rather than warming further during January, they actually dropped. If that trend were to continue, El Niño would be short-lived.

Departure from average of the surface and subsurface tropical Pacific sea temperature averaged over 5-day periods starting in early June 2018. The vertical axis is depth below the surface (in meters) and the horizontal axis is longitude, from the western to eastern tropical Pacific. This cross-section is along the equator. (Source: Climate.gov figure from CPC data.) But there are reasons to expect that the cooling trend will not continue, and that some degree of warming will resume. One reason is the huge blob of warm subsurface waters depicted in the animation above. It's rising from the depths of the Pacific and should soon surface, helping to keep equatorial Pacific temperatures above the El Niño threshold through Northern Hemisphere winter and probably the spring too. Beyond then, computer models have difficulty predicting future conditions due to a phenomenon known as the "spring predictability barrier." But based on the evidence available, scientists peg the odds of El Niño continuing at less than 50 percent. El Niño typically increases the odds of wetter than average conditions across the U.S. southern tier of the United States, and warmer along a wide swath of the northern tier, extending far to the north into Canada and Alaska. But the current El Niño is such a weakling that other forms of climatic variability could well outweigh it's impact. As a result, forecasters believe the odds of typical El Niño impacts are reduced. One thing is for sure: time will tell.