Iselle Now a Hurricane Threat to Hawaii; Julio is Following — and a New Disturbance Has Just Formed 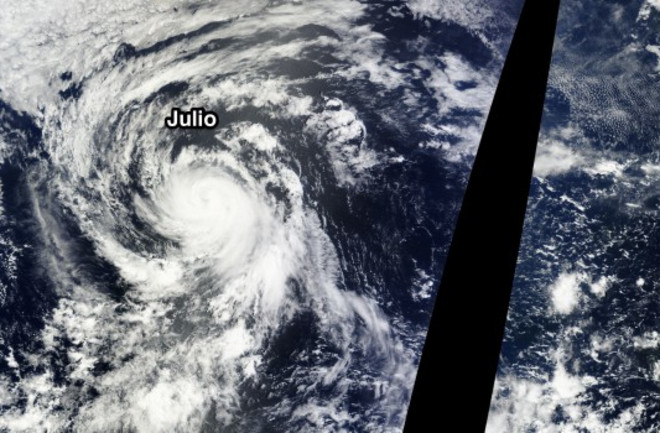 Hurricanes Iselle and Julio, as well as a disturbance that has just formed off Central America, are visible in this image captured by NASA's Terra Satellite on Aug. 6, 2014. (Source: NASA) Yesterday, I posted a satellite image showing double cyclonic trouble headed for Hawaii. Today the threat became even more troubling.

Source: Central Pacific Hurricane Center At 5:15 p.m. EDT today, the National Weather Service issued a hurricane warning for the Big Island of Hawaii, as Iselle is now expected to lash the island with hurricane-strength winds on Thursday. Maui and Oahu may experience tropical storm conditions. Click on the thumbnail at right to see the forecast track for Iselle. As I'm writing this, Iselle's winds are pegged at about 90 miles per hour. As it approaches Hawaii, drier air is expected to cause weakening. But it's not yet clear how strong the storm will be. It could wind up as tropical storm. But consider this warning from the Central Pacific Hurricane Center:

IT IS IMPORTANT TO NOTE THAT REGARDLESS OF WHETHER ISELLE REACHES THE BIG ISLAND AS A TROPICAL STORM OR MINIMAL HURRICANE...THE IMPACTS WILL STILL BE VERY SIMILAR.

Those impacts include torrential rains of 4 to 8 inches, and possibly double that in places, leading to flash flooding and mudslides. Following Iselle is Hurricane Julio, now with 75 mile per hour winds. That storm is not as much of a threat to Hawaii, because it's current forecast track would take the heart of the storm a little north of the islands at midday on Sunday. But if the models are just a bit wrong, and Julio passes closer to the islands, the storm could bring additional rain — which could be quite damaging in the aftermath of Iselle. At Mashable, my friend and colleague Andrew Freedman is calling this scenario — two hurricanes approaching Hawaii from the east — "unprecedented." That's because relatively dry air and cool waters typically cause hurricanes to fall apart before getting close to the islands. Jeff Masters, chief meteorologist for The Weather Underground, is calling the scenario "rare." As he explains:

Masters cites research suggesting that climate change may actually increase the number of hurricanes that affect Hawaii. You can read about that here. I should also note that Iselle and Julio aren't the only tropical cyclones swirling in the Pacific right now. To the west are Tropical Storm Genevieve and Typhoon Halong. That latter storm is poised to barrel into Japan as the equivalent of a strong Category 1 or weak Category 2 hurricane. Maximum winds at landfall on Saturday morning local time could be as high as 100 miles per hour. This is a dangerous storm. Meanwhile, way to the east, all the way across the Pacific, a disturbance has just formed off Central America. You can see it in the satellite image at the top of the post, acquired by NASA's Terra satellite today. According to the National Hurricane Center it stands a 20 percent chance of turning into a tropical storm in the next 48 hours, and a 30 percent chance over the next five days.