Is the UAE's New Zero-Carbon City More Revolution or Gimmick? 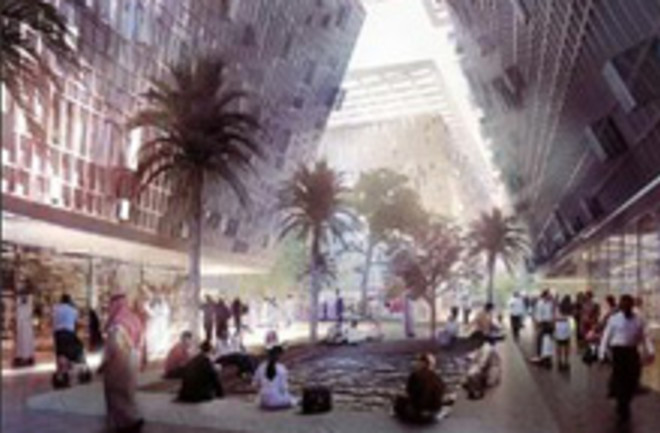 Twenty miles outside of Abu Dhabi, in the scorching desert of the United Arab Emirates, the new planned city of Masdar is nearly ready for its close-up. This weekend The New York Times reported from the experimental zero-carbon closed community, funded by stacks of oil money, which is now prepared to take on its first inhabitants. The urban design is simultaneously sleek and unsettling, raising the questions: Is this what the city of the future will look like, and would that be a good thing? Masdar's main designer, Norman Foster, hits all the notes that make green ears perk up: excluding any carbon-based energy sources, using simplified "sustainable" architecture, and learning from the lessons of the past, even going back as far as centuries-old desert settlements.

Among the findings his office made was that settlements were often built on high ground, not only for defensive reasons but also to take advantage of the stronger winds. Some also used tall, hollow “wind towers” to funnel air down to street level. And the narrowness of the streets — which were almost always at an angle to the sun’s east-west trajectory, to maximize shade — accelerated airflow through the city. [The New York Times]

Masdar, which is a mile square and built to house 90,000 people, will draw nearly all its power from solar panels

outside the city. The city's infrastructure—including the solar project, the water treatment plant and the waste operations—will be outside the city perimeter. The network of streets for vehicles, prowled by electric cars only, is all underground. All the dirty bits of the city, then, are out of sight.

The result is a green Disneyland—an assessment Foster doesn't really fight. And it's a little scary to think that this is the way the world is going, the well-off in ever-smaller enclaves, protected by walls—visible and invisible. [TIME]

As TIME properly points out, the fact is this: Foster's cloistered vision in itself has little to offer the vast majority of human beings on this planet, a growing number of whom live in burgeoning, old-fashioned cities that aren't going to be retrofitted into Masdars anytime soon.

Masdar, by contrast, may be too expensive for anyone other than a petro-state like Abu Dhabi to undertake for any significant chunk of the Middle East’s burgeoning population. Rather than building a better suburb, it’s like building an encampment on Mars, which is what humans look to as an escape hatch for when we’ve polluted Earth beyond repair. It’s too early to start thinking that way about existing cities. [Washington City Paper]

If Masdar is reminiscent of anything, it's Biosphere 2

, the early 1990s experiment that is the subject of a feature in the October issue of DISCOVER, out on newsstands now. The Biosphere's original mission, to create a totally self-contained environment, today is mostly a historical curiosity. But the research done there, both during the original mission and afterward when universities took over

, could have real implications for the world at large. The same might be true for Masdar. Most of us will never live in a place like the United Arab Emirates' little private Eden, but the desert experiment could provide valuable lessons for developing cities that are green and clean—but not sanitized.

The dynamic and often messy energy that created the world's greatest urban centers -- Rome, London, New York, Tokyo -- is sometimes seen as problematic by governments that want to market their municipalities to businesses, investors, and tourists. ... Can a place like Masdar find a way to let that inside the walls? [Grist]

Related Content: DISCOVER: 10 Zany (Or Genius?) Plans for Green Cities of the Future

DISCOVER: The King of Green Architecture