Is Googling Bad For the Environment? 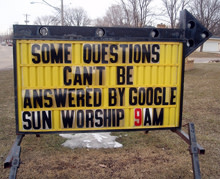 Is "Don't Be Evil" Google in fact a sinister pollution-spewing machine? A Sunday Times article cited new research by Harvard physicist Alex Wissner-Gross, claiming that every Google search emits 7 grams of CO2, about half the amount released from boiling a kettle of water (15 grams). It portrays Google as "secretive about its energy consumption and carbon footprint" and refusing to "divulge" the locations of its power-sucking data centers. There's more:

When you type in a Google search for, say, “energy saving tips”, your request doesn’t go to just one server. It goes to several competing against each other. It may even be sent to servers thousands of miles apart. Google’s infrastructure sends you data from whichever produces the answer fastest. The system minimises delays but raises energy consumption. Google has servers in the US, Europe, Japan and China.

The article also implicates other online activities, like Twittering or maintaining an avatar in Second Life (by one estimate, that avatar uses almost as much electricity as the average citizen of Brazil). Google promptly put out a response on their blog challenging Wissner-Gross' claims and touting the company's green credentials. Each search emits a mere 0.2 grams of CO2, says Google. Besides, isn't online searching greener than driving to the library? Jason Kincaid of TechCrunch agrees and offers some perspective:

A single book runs around 2,500 grams of CO2, or more than 350 times a Google search. By some estimates, a single cheeseburger has a carbon footprint of around 3,600 grams—over 500 times larger than a Google search.

Coding the Future: A Q&A With Hadi Partovi of Code.org