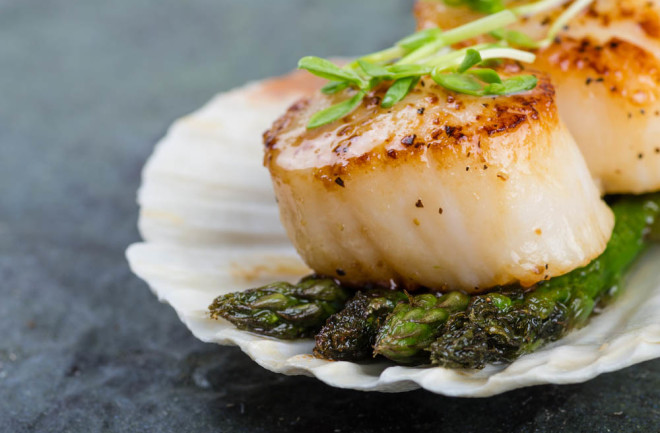 Scientists exposed scallops, a popular seafood, to tiny bits of plastic and watched how fast they sucked up the pollutants. (Credit: Zigzag Mountain Art/shutterstock)

Plastic is in just about everything these days, including living, breathing creatures, from sea critters to people. Environmental waste and litter breaks down into tiny, microscopic particles. Those particles can then seep into water supplies and subsequently work their way into just about anything. That includes plastics in the seafood we eat.

Now, a new study in the journal Environmental Science and Technology has found that it takes just six hours for billions of nanoplastic particles — those with a diameter some 100 times smaller than a human hair — to accumulate throughout the body of a certain mollusk.

This is far from the first time researchers have looked into how nanoplastics can permeate marine organisms. But many past studies, according to this paper’s authors, were hamstrung by relying on fluorescent dye to tag the plastic. In order for the dyed particles to show up, high concentrations — more than what scientists suspect have built up in our oceans and water sources — of the nanoplastics would need to accumulate in whatever organism researchers were studying.

So for this experiment, researchers in Canada and the UK created their own nanoplastics: a version of a polymer called polystyrene, the main compound that makes up Styrofoam. This variety allowed the team to use an imaging technique that could pick up the particles at more realistic concentrations.

In order to get a sense of how the nanoplastic particles could affect marine life, the team turned to a mollusk called the great scallop, which lives mainly in the east Atlantic. They starved the scallops for two days, making sure the little critters were hungry. Then, in various aquariums, they mixed algae, a food source for the scallops, and nanoplastic particles of two different sizes: 24 nanometers and 250 nanometers. Finally, the researchers released the ravenous scallops into the tanks and let them feed.

After only six hours in the plastic-laden environment, the scallops had billions of nanoplastic particles circulating throughout their bodies, including in their gills, gonads, kidneys, muscles and intestines. And the scientists found that of the two particle sizes, those measuring at 24 nanometers had built up faster in that six-hour window. Luckily, when the researchers put the scallops back in clean water, it only took about three days for most of those particles work their way out of the scallops. But some of the bigger nanoplastic particles took much longer to leave.

“We only exposed the scallops to the nanoparticles for a few hours, and despite them being transferred to clean conditions, traces were still present several weeks later,” says Richard Thompson, an environmental toxicologist at Heriot-Watt University and one of the study’s authors, in a press release.

In fact, it took the scallops 48 days to get to the point where the team couldn’t detect any more plastic.

Studies like these, that delve into how animals take up and get rid of nanoplastic particles, are key if we want to understand the “risk these particles pose to both organism and human health,” Thompson says. And with the rate plastic is building up on our planet, let’s just hope we get there sooner rather than later.