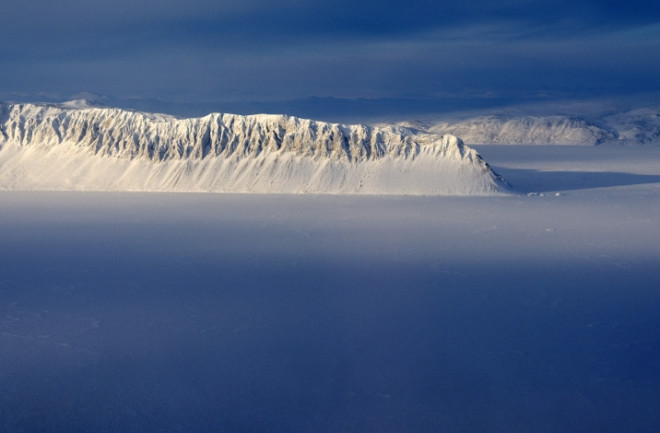 (Credit: NASA/Michael Studinger) Greenland is a giant ice sheet covered in snow. Its snowline — the border where snow cover and bare ice abut — migrates with the seasons, sliding to lower elevations in the winter and shifting up in the summer. Now researchers find that not only does the snowline move much more dramatically than they thought, but it also accelerates melting of the ice sheet. That’s a problem because the Greenland ice sheet is melting into the ocean and contributing to global sea level rise. The new finding could change climate model predictions, the researchers say. "We found that [climate] models don't reproduce snowlines very well, which adds an uncertainty to future projections," Jonathan Ryan, a glaciologist at Brown University in Providence, Rhode Island, who led the new research, said in a statement.

In Greenland, summer’s melting snow exposes bare ice. Whereas snow is bright and reflective, ice is much darker and therefore much better at absorbing heat from the sun. (Think about walking barefoot on blacktop compared to a white sidewalk). Since the ice absorbs twice as much sun as the fluffy white stuff and holds onto less water, it creates more meltwater. Knowing how much of Greenland is covered in snow versus bare ice is critical for accurate climate models. To get an idea of where the snowline is, Ryan and colleagues flew drones out over Greenland’s ice sheet to the snowline. The drones recorded the snowline’s position and flew back. But high winds grounded the drones for a few days. When the researchers sent out the drones again, they found the snowline had shifted significantly. “Suddenly the snowline was just gone," Ryan said. "In a couple of days it had moved 30 kilometers or so [more than 18 miles] up the ice sheet and was now out of the range of our drones. That was the first moment we thought we should investigate the effects of snowline movement on melt.”

Ryan and team used satellite images to map the snowline across Greenland from 2001 to 2017. The map showed the snowline retreated about 55 feet per year between 2001 and 2012, increasing the amount of ice exposed to the sun. The amount of exposed ice ranged from 10 percent of the Greenland ice sheet to 16 percent, the researchers report this week in the journal Science Advances. The team also found the moving snowline exposed dark, bare ice and intensified ice sheet melt. The results suggest current climate models inaccurately predict snowline elevations and lend uncertainty to the model’s predictions of sea level rise from Greenland ice sheet melt. "This study shows for the first time that this simple partitioning between bare ice and snow matters," Laurence Smith, a geographer at UCLA who led the study with Ryan, said in a statement. The researchers are now working with climate modelers to optimize the models’ predictions. "Now that we've shown how important the snowline effect is, and have some direct observations of snowline positions, hopefully we can improve these models going forward," Ryan said.