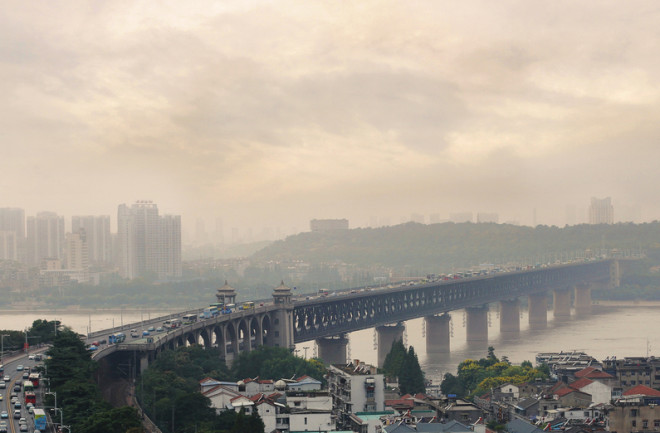 The air in many of China's citiesis among the dirtiest in the world, but how does that translate to effects on human health? An economist at MIT ran the numbers to quantify just what how much a city's air can shorten a person's life. And he made creative use of a quirk in China's history to do so. The Huai River runs horizontally across China, unofficially splitting the country in two: the North and South. During the country's central planning period in the mid 20th century, the Chinese government implemented a winter heating policy that shares its name with this river. The government provided boilers and free coal to cities north of the river from 1950 to 1980, but not in the warmer climates to the south. Many of these boilers are still in use today. Because the river provides a clear divide between where the coal burning was and wasn't happening, there was also a distinction between where the resulting particulate air pollution did and didn't occur. Most people tended to stay on their respective sides of the river, too, due to a concurrent policy of household registrations that restricted mobility. This situation set up a sort of unofficial experiment that nowallowed researchers to retrospectivelycompare the health impacts of particulate pollution on residents north and south of the river.

Quantifying the Effects of Pollution on People

Researchers from the U.S., China and Israel compiled data on air pollution and mortality throughout China during the 1980s and 1990s. They examined particulate pollution and life expectancy and controlled for variations in wealth, age, sex and urbanization---and they found a striking connection. During the '90s particulate levels in the air over northern China were 55 percent higher than in the South and life expectancies were 5.5 years shorter. Collectively, then, the 500 million people living in northern China during this decade lost 2.5 billion years of life due to the burning of coal to heat homes and offices. Solidifying the connection, the researchers determined that the causes of death that were elevated in the North were all linked to ambient air quality: heart disease, stroke, lung cancer and other respiratory illnesses. Non-cardiorespiratory causes of death were equally commonbetween the North and South. This is the first direct evidence of the impact of air pollution on life expectancy in China. The authors say it is an important step toward documenting a causal relationship between particulates and shortened life expectancy.

Particulate pollution during the '90s was about 550 micrograms per cubic meter of air in northern China versus about 350 in the South. To compare, the U.S.'s particulate levels were hovering around 45 µg/m^3 at this time. Today, China's northern cities continue to burn coal, so their particulate levels are rising with their population. In January Beijing saw levels as high as 755 µg/m^3. And particulate levels are still 26 percent higher north of the Huai River, meaning people in northern China can still expect a shorter lifespan than their compatriots to the south. The authors say the pollution and coal-burning legacy resulting from the Huai Riverpolicy could explain why the enormous economic growth in China has not triggered the parallel rise in life expectancy that one might expect. They published their research in Proceedings of the National Academy of Sciences Monday. The researchers didn't stop there, though. They wanted to make their findings applicable beyond China's borders, so they came up with a broader metric. According to their calculations, long-term exposure to an increase of 100 micrograms of particulate pollution translates to a 3-year drop in life expectancy, no matter the country or time period. The researchers hope their metric will provide concrete numbers to help the governments of developing countries weigh the human health costs against economic benefits when drafting future pollution policies. Top image: Air pollution in the city of Wuhan, China. Image courtesy of Barnaby Chambers/Shutterstock