Two months of heavy rains — part of a pattern that spawned Tennessee’s deadly tornadoes — have caused misery across the South. 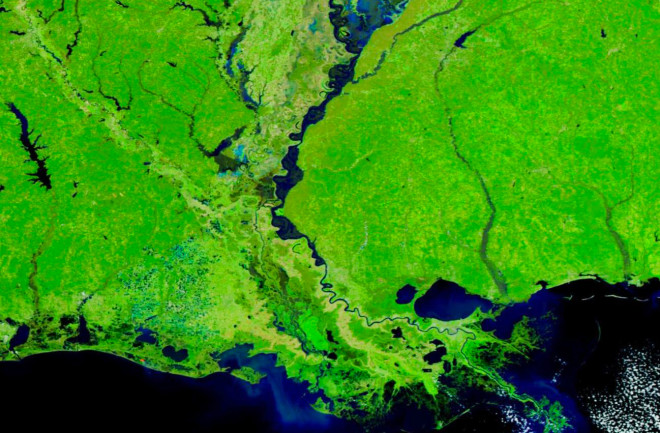 Flooding along the Mississippi River and surrounding water bodies is evident in this false-color image acquired by the Suomi NPP satellite on Feb. 27, 2020. (Credit: NASA Earth Observatory, modified by Tom Yulsman)

Although we’re only at the beginning of March, springlike flooding has been plaguing communities in the Deep South for weeks now.

The misery has resulted from heavy rains that just won’t let up.

It all continues today (Wednesday, March 4), with more rain, severe thunderstorms, and flash flooding forecast across much of the Deep South — from Texas to Florda, and including the particularly hard-hit southern Mississippi Valley. It’s part of the same pattern that in the overnight hours of Tuesday spawned Tennessee’s devastating tornadoes. At least 25 people have died.

The continued rain is likely to worsen the flooding arising from January’s and February’s deluges. That flooding is dramatically evident in false-color satellite images combining visible and infrared views, such as the one above.

Areas where rivers have overflowed their banks and spread out along their floodplains are rendered in deep blue. The thickest ribbon of blue in the image is the Mississippi, stretching from above Vicksburg, Mississippi, in the north, all the way down to New Orleans in the south.

A comparison of images captured at different times by the Suomi NPP satellite shows the scope of recent flooding along the Mississippi River. (Credit: Images: NASA Worldview. Animation: Tom Yulsman)

To get an even better sense of the extent of the flooding, I created this before-and-after animation of Suomi NPP satellite images. One shows the scene on Feb. 25, 2017, with relatively normal conditions. The other image, acquired on Feb. 27 of this year, reveals significant flooding, as evident in the expansion of dark blue along the Mississippi and other water bodies across the Deep South.

In the false-color scheme used in the imagery, infrared light from the sun that’s reflected from the ground and received by the satellite sensor is rendered in green. This portion of the spectrum is reflected very strongly by vegetation, making the green particularly vivid. Among other things, this helps floodwaters stand out because of the stark contrast with their dark blue coloring.

January 2020 saw much wetter conditions than normal along much of the Mississippi River. (Credit: NOAA)

The heavy, persistent rains responsible for all the flooding caused the Pearl River to crest at 36.8 feet near Jackson, Mississippi. This was the third-highest level on record for the city, and the highest since 1983. Those records go back to the 1800s.

The river flows through the heart of southern Mississippi, and for part of its course forms the border with Louisiana. In the satellite imagery, it is the prominent watercourse east of the Mississippi.

I created the animation above to provide a closer view of the flooding along the Mississippi itself. It consists of false-color images captured by the Sentinel 2 satellite. One was acquired on Jan. 31, 2017, the other on March 1 of this year, with significant flooding underway.

The images show the stretch of the river between Vicksburg in the north and Natchez in the south. From top to bottom, the image covers about 75 miles.

Locations within the Mississippi Valley with a 50 percent or greater risk of flooding during March, April and May 2020. (Credit: National Weather Service)

Given saturated soils and the outlook for continued rain, the entire Mississippi is at heightened risk of flooding in the coming weeks, as the map above shows. The flooding risk is high all along the river, but particularly in the Upper Midwest region.