Image of the Day: Red Rocks at Sunset 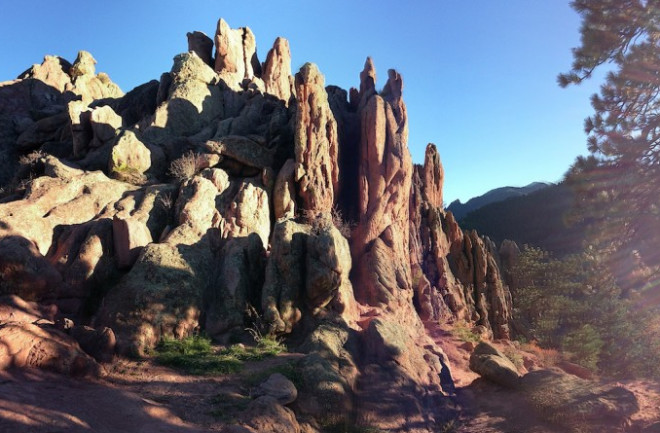 The Red Rocks, seen here at sunset in an iPhone photo mosaic, rise just to the west of Boulder, Colorado. (Photo: © Tom Yulsman) I'm addicted to two things: running and photography. With the iPhone, I can do both at the same time. The image above is one of the results. It's actually a mosaic of iPhone images that I shot at sunset while on a trail run this week just west of downtown Boulder, Colorado. It shows a locally beloved geologic feature known as Red Rocks. I used an awesome app called Autostitch to seamlessly stitch together individual, full-resolution images to create this panorama. The fins are roughly 25 to 50 feet high. With this image, I'm launching a new feature at ImaGeo: an image of the day. It will be combination of compelling remote sensing imagery and photography. I'll do my best to post something daily, but since this is not my actual day job, I may miss some here and there. The stoney fins of the Red Rocks are composed of Fountain Formation sandstones that are almost 300 million years old. These rocks formed from sand and gravel that were laid down in layers as an ancient mountain range called the Ancestral Rockies eroded away. (For more about the geology of the Boulder area, click here.) Here's one more photograph from the same trail run:

Sandstones of the Fountain Formation just west of Boulder, CO. (Photo: © Tom Yulsman) Same geologic formation. At the time that I shot it (a straight iPhone photo, no Autostitch mosaic), I was struck by the colors. Looking at it now, I'm seeing a turtle.