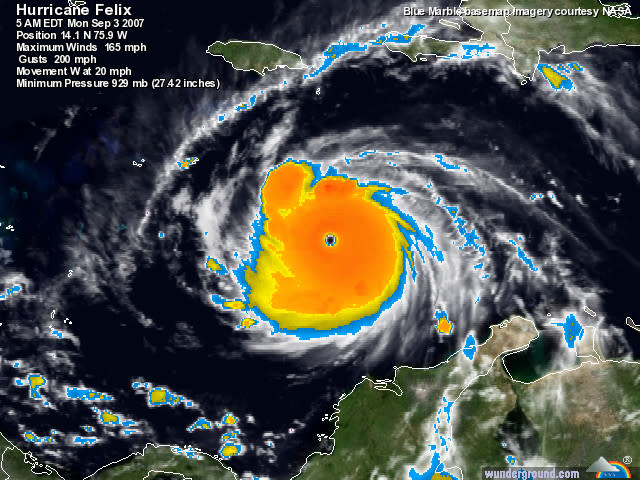 * After not having once since Andrew in 1992, we are now expected to see two Category 5 Atlantic basin hurricane landfalls in the space of 2 weeks. * Hurricane Felix reached Category 5 on September 2, just 13 days after Hurricane Dean reached it on August 20. * Both hurricanes are stronger than anything seen in the Pacific this year, even though Pacific typhoons are generally more frequent and powerful than Atlantic hurricanes. * 11 am ET, Sunday Sept 2: Felix was at 90 knot maximum sustained winds. By 8 pm ET, Sunday Sept 2, maximum sustained winds were 145 knots, for an increase of 55 knots in 9 hours.

The staggering facts also continue when it comes to the Atlantic in general:

Are we worried yet?

[See here for the total list of known Category 5 Atlantic hurricanes. It is likely that at least some Category 5s were missed in earlier eras.]