Hurricane Alex Held Up Oil Cleanup—And in Some Places, Made Things Worse 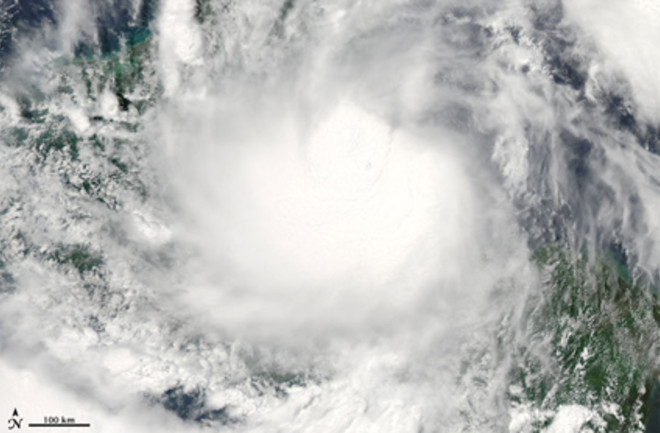 The eye of Hurricane Alex steered hundreds of miles clear of the center of the BP oil spill, but it still managed to hold up cleanup efforts in the Gulf of Mexico. Alex was by no means a whopper, reaching category 2 status at its height and blowing with winds just over 100 miles per hour. While mild by hurricane standards, it meant that only the largest ships, like those doing the relief well drilling and oil capturing, could stay out at sea.

Hundreds of shrimp boats that were converted into oil skimmers now sit in port, and the tall waves tossed boom that was holding back the oil onto the beaches of Grand Isle, La. The beaches are now too dangerous even for cleanup crews. "Those booms, they don't seem like they were designed for this kind of wave action," said Matthew Slavich, an oyster fisherman hired by BP for cleanup efforts. He was out on the open water trying to lay boom today, but didn't stay long [ABC News].

Besides hampering cleanup efforts, Alex also negated some of the work crews already did.

In Louisiana, Alex pushed an oil patch toward Grand Isle and uninhabited Elmer's Island, dumping tar balls as big as apples onto the beach, and in Alabama, normally white sand was streaked with long lines of oil, reports the Associated Press. "The sad thing is that it's been about three weeks since we had any big oil come in here," marine science technician Michael Malone told the AP. "With this weather, we lost all the progress we made" [USA Today].

The hurricane made landfall last night and ravaged fishing villages on the Mexican coast. Texas was largely spared by Alex's path, and the hurricane has already been downgraded back to tropical storm status as it heads inland, where it will peter out. Alex was the first named hurricane of what could be a busy season, at least according to forecasters. And it showed how much more difficult oil cleanup will become—even a relatively weak hurricane that veered away from the oil spill put response efforts on hold. The Obama administration already missed its stated goal of containing 90 percent of the oil by the end of June. The weather also held up the roll-out of BP's newest weapon: the world's largest skimmer. It's a gigantic ship from Taiwan whose owners have been refitting it into an oil skimmer.

The Taiwanese-flagged former tanker named the "A Whale" is the length of 3 1/2 football fields and stands 10 stories high. It just emerged from an extensive retrofitting to prepare it specifically for the Gulf, where officials hope it will be able to suck up as much as 21 million gallons of oil-fouled water per day. "It is absolutely gigantic. It's unbelievable," said Louisiana State University environmental sciences professor Ed Overton, who saw the ship last week in Norfolk, Va [AP].

80beats: Next from X Prize: An Award for Cleaning Up BP's Oil Spill?

80beats: This Hurricane Season Looks Rough. What If One Hits the Oil Spill?