How You Walk Differently With Friends and Lovers

Researchers found that males walk significantly slower when walking with a female, but only when that female is their romantic partner. 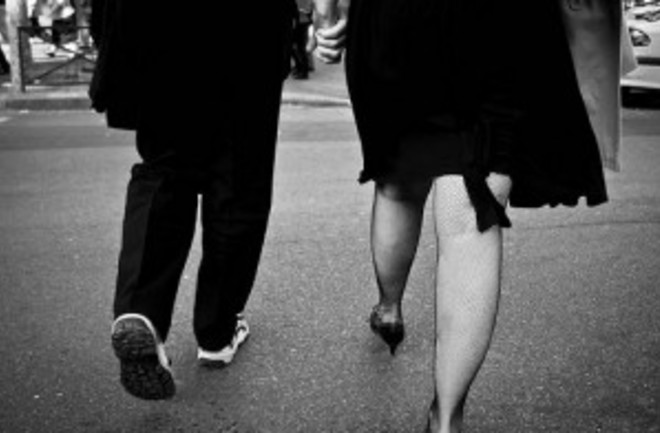 Everyone knows that tall people walk faster than short people. But what happens when a tall and a short person — or a man and a woman — walk together? Does one tend to adjust his/her speed more, or do they each adjust their paces to meet in the middle?

In this study, the researchers observed pairs of people walking separately and then together and measured their walking speeds. They found that males walked significantly slower when walking with a female, but only when that female was their romantic partner. In all other pairs, the individuals each slightly (but not significantly) adjusted their speeds.

Interestingly, in female-female pairs, both walkers actually walked more slowly than their usual pace, while male-male pairs walked more quickly. The authors propose that the differences may have an evolutionary origin — “Because the male carries the energetic burden by adjusting his pace (slowing down 7 percent), the female is spared the potentially increased caloric cost required to walk together.”

So ladies, if you’re wondering whether your (male) crush is interested, here’s a way to test: take a walk, and watch how much he slows down for you.

Here we examine speed choices made by individuals of varying stature, mass, and sex walking together. Individuals (N = 22) walked around a track alone, with a significant other (with and without holding hands), and with friends of the same and opposite sex while their speeds were recorded every 100 m.

These findings have implications for both mobility and reproductive strategies of groups. Because the male carries the energetic burden by adjusting his pace (slowing down 7%), the female is spared the potentially increased caloric cost required to walk together. In energetically demanding environments, we will expect to find gender segregation in group composition, particularly when travelling longer distances.”

“These results are consistent with other data that demonstrate that males walk faster than females both while walking alone [17], and while walking in single sex groups [25], [27]. The results further indicate that any difference in walking speeds between female dyads and male-female dyads is not significant [25].

The data do show however, that there is a decrease in the speed choice between males walking alone and males walking with females; the degree of this speed “accommodation,” however, is linked to the relationship status of the male-female pair, such that males will nearly match the females’ paces only if they are in a romantic relationship.

In friendships, the male slows down, but to a lesser (non significant) degree. Furthermore, the differences found between male-male dyads and female-female dyads are also consistent with the hypothesis that social closeness will be mirrored by speed choices [25].