Planting new corals can't stop climate change, but it can give marine ecosystems a fighting chance. Volunteers have largely led the ambitious effort. 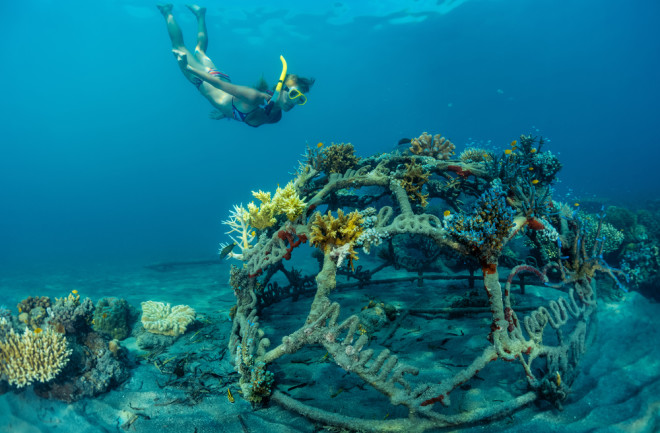 Coral reefs might be the poster child of how climate change dismantles ecosystems. Around the world, the color in these underwater marvels is draining away. And while disease or disasters like ship groundings used to be the main reasons for a reef’s destruction, climate change has emerged as the dominant cause. Rising oceans temperatures are pushing each colony of tiny organisms to (or past) their survival limits.

When vibrant corals turn into white, lifeless shells, other reef inhabitants disappear — along with associated tourism and fishing industries. The value of reefs for ocean creatures and humans has motivated biologists, activists, nonprofits and even resorts and to try and build the corals back up again. “The development of coral restoration is unique in that it’s really been a bottom up, grassroots, volunteer-based field,” says Lisa Boström-Einarsson, a marine ecologist at Lancaster University in the UK.

Groups can use a range of techniques, from fertility protocols to delicate gardening and replanting. And as the tactics have grown and evolved over the years, so have the ambitions. “Restoration is not seen anymore as a way to restore reefs back to historic baselines,” says Margaux Hein, the lead consultant for MER Research and Consulting during a lecture with the Arizona State University Center for Global Discovery and Conservation Science. Instead, programs are preparing corals for the future, so they can withstand whatever conditions climate change brings.

Take Your Pick of Protocols

The last time anyone counted, roughly 362 different coral restoration projects were operating around the world. Boström-Einarsson and her colleagues were the ones who conducted the tally. Published in January of 2020, the assessment was meant to provide a run-down of which restoration options were in the works and what kinds of issues the initiatives ran into.

One of the most common tactics is the most straightforward: planting corals into a struggling reef. With these marine creatures, there are no roots to bury in the sea floor. Instead, restoration teams mimic the way corals stick to rocks, except they use glue, plastic ties or clips to fasten down the new additions. Chunks of corals that get broken off can be reattached to their homes with this method — for years, Florida has required that corals broken off by ships be put back into place. And because coral pieces regenerate into new and independent corals, conservationists can bring the broken off pieces floating in the ocean to the seafloor where they are needed. Hein refers to these drifting coral as “fragments of opportunity."

But conservationists can’t always wait around for damaging storms or poorly-navigated ships to strike in order to obtain coral pieces. So in the 1990s, biologists started coral gardening: growing small pieces en masse to attach to declining reefs. In some cases, teams hang PVC pipe skeletons in the ocean, arms dangling with coral bits. Expanding the size of so-called coral nurseries is simple — cut off a piece of one of the garden inhabitants and let the coral bit grow itself.

As the tiny organisms that make up a piece of coral grow on their own, these jellyfish relatives essentially clone themselves. Ideally, a resilient coral community has genetic diversity, Hein explains, to prevent a situation where all the residents die off from a single threat, like a disease or a heat wave, that might roll through. That’s why some restoration tactics aim to make spawning — the mass release of eggs and sperm into the ocean — more successful. Conservationists harvest the clumps of sperm and eggs, often called slicks for the way they gather and float in the water, and bring them together in the lab before letting them resettle on the reef.

Corals plunked down into the water benefit from something solid to grow off of, so programs might beef up the reef infrastructure to give the new residents a firm foundation. Metal, plastic or concrete frames can mimic original reef structures. Other projects go for the simpler route of stabilizing existing fragments. Recent observations of a reef in Indonesia that had suffered from destructive fishing protocols found that 16 years after restoration teams secured underlying rubble, the amount of floor that coral covered was 84 percent larger than it was when the project began. In some cases, “making sure there’s stable substrate for natural coral to come back to might be enough,” Hein says.

Historically, it's not typical to check-in on the progress of a coral restoration project 16 years after it began. Boström-Einarsson and her team found that 60 percent of the initiatives watched for progress on sites for less than a year and a half. That can be a problem since coral can only grow up to about 4 inches in a 12-month span. Monitoring should really continue for a longer period to determine if the restored reef patches are healthier or better equipped to withstand disaster. “We’ve been sounding the bell that monitoring for restoration has been inadequate for a good four years now,” Hein says.

It makes sense that people would rather spend their budget putting down more fragments than spend years tracking progress. But momentum is building for initiatives to keep their eyes on a project for longer. Permits that authorize restoration plans are starting to add requirements for extended monitoring, and Hein thinks short survey times will fade in the coming years. And maybe, just maybe, some programs out there have been keeping better information on their restorations than Boström-Einarsson currently knows about. “I’m just really hoping that programs that have been in the water long enough have collected data and someone is typing it up,” she says.

In fact, there’s a lot of change coming for coral restoration practices and protocols. The one-off, volunteer nature of restoration projects can spur larger change and still accomplish healthy coral expansion, but projects can operate as islands, not always learning from one another or sharing information about what tactics are successful. “We are at a turning point in what methods are being used, how projects are being evaluated, and what materials people are using,” Boström-Einarsson says.

In 2018, the Australian federal government announced $337 million in funds for reef protection and restoration, and in January of 2021, the United Nations Environment Program and the International Coral Reef Initiative released a report to guide potential projects through essential decision-making steps — whether restoration is needed in the first place, if local communities want this kind of program, what kind of tactics make sense and importantly, what determines success.

Boström-Einarsson says that despite the dreamier aspirations some might have, each given restoration project doesn’t have to play a role in solving the global coral reef crisis. Instead, it can be an experimental plot, or help local fish return, or even operate only as a training reef for divers learning to navigate the larger, wild expanse. And ultimately, restoration efforts can’t save the reef. Only addressing climate change can do that.

Keeping corals healthy and thriving through restoration can ensure the organisms stick around to see an ocean where rising temperatures are finally reigned in, Hein says. Otherwise “it will not be successful unless we have climate action happen, and happen fast,” she adds.