How to Prevent Glacial Lakes From Flooding Mountain Communities 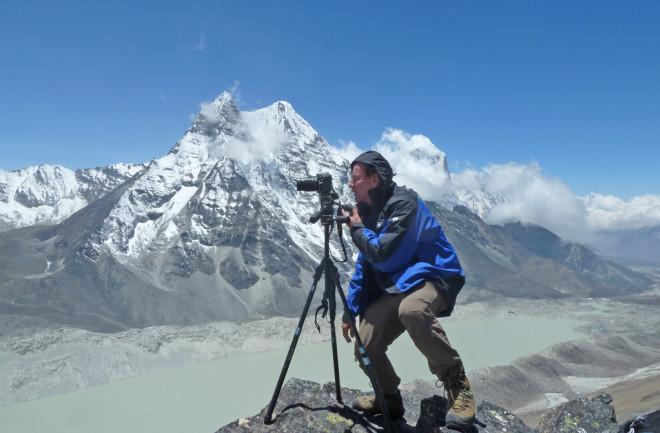 As temperatures rise around the globe, glaciers are shrinking at an unprecedented rate. The resulting glacial meltwater can form dangerous lakes contained only by unstable rock and debris. These can burst from their basins at any moment, flooding communities and potentially killing thousands.

Equipped with mountaineering gear and a Ph.D. in geography, Alton Byers, the director of science and exploration at the nonprofit Mountain Institute in Washington, D.C., has spent his career traversing treacherous high-altitude ridges and navigating alpine wilderness to prepare remote Himalayan villages for climate change.

I am working now on Imja Lake in the Mount Everest area with local communities, the University of Texas at Austin and the U.S. Agency for International Development. Imja was a glacier back in the 1960s, and now it is 66 million cubic meters of water.

When a glacier moves down a valley, it pushes aside rock, soil and debris, creating a moraine, or levee-type horseshoe-shaped structure. When that glacier recedes, it leaves a basin, enclosed by the moraine and remaining glacial ice, which fills with meltwater.

Ground-penetrating radar determined that Imja Lake is held there by a very fragile moraine. And to add insult to injury, we discovered that the moraine still has an ice center. If you start digging a canal through the levee and into adjacent land to try and lower the lake, you’re going to hit ice. Eventually, the sun will melt the newly exposed ice, and you might end up creating a flood, as opposed to preventing one.

One of the best solutions has come from local people. Immediately downstream is a huge basin that floodwater from Imja would naturally spill into. It is bordered by the remains of an old moraine. One of our local partners, Sonam Hishi Sherpa, said: “Why don’t you just finish this natural dam? Just build a little 60-meter-high section that closes off this entire basin.”

Modeling different scenarios showed that this would actually reduce the risk by 80 percent. Whereas if you lowered Imja Lake by 3 meters, as was originally proposed, you would reduce the risk by less than 2 percent. We’ll continue working with the locals to fix the looming problem and to develop a disaster management plan.

In addition to the glacial lake, the area is also prone to earthquakes, which could trigger a glacial lake outburst.

I have not personally seen an outburst, but I think I have the only set of photographs that show the aftermath. It happened in 1998 in a remote valley not too far from the Everest area. Witnesses of outbursts have described the water sloshing from side to side as it descends at up to 60 mph, and the accompanying moaning of the flood, and the smell. The smell has been described as everything from rotten eggs to gunpowder.

To suddenly look up and see this wall of debris roaring toward you must be one of the most frightening ways to die. After we did our Imja surveys last September, just to be safe, I purchased a little brass Buddha and set it down facing the lake. It’s nice to have all bases covered.

— As told to Tasha Eichenseher