How to Harvest Terawatts of Solar Power on the Moon 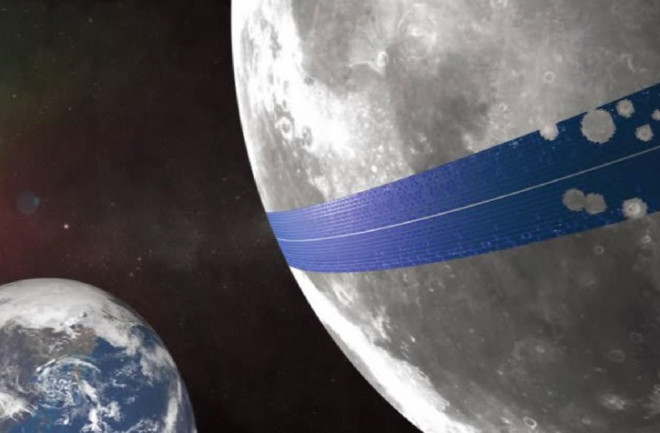 Planet Earth isn’t the most ideal place for solar power to thrive. Sunsets and weather afford solar panels a significant amount of downtime.

But there’s a place not too far from here where the sun never stops shining.

A handful of researchers, and more recently the Japanese corporation Shimizu, have been gearing up to develop solar power on the moon.

Shimizu took off with the idea in 2013 in the aftermath of Japan’s 2011 Fukishima accident, which produced a political climate demanding alternatives to nuclear power plants. Shimizu’s plans call for beginning construction of a lunar solar power base as early as 2035. The solar array would be 250 miles wide and span the lunar circumference of 6,800 miles. They’re calling it the Luna Ring.

Lunar Solar Power (LSP) arrays would receive higher energy density from sunlight than we get through Earth’s atmosphere, avoid weather, and could beam energy to any part of Earth facing the moon. LSP could, theoretically, even satisfy 100 percent of our energy needs. That would be approximately 18 TW today and possibly 24 TW by mid century.

The key to lunar-based solar on Earth is microwave transmission. Energy from the sun can be converted into microwaves in the same way radar beams are generated.

The technology has been around for many decades, and it’s dependable and efficient. A few weeks ago, the National Space Society’s (NSS) proposal on space-to-space transmission of energy as microwaves was rated in the top 1 percent of ideas presented at the D3 Innovation Summit, hosted by the Department of State in January.

The NSS wants to demonstrate the feasibility of space-based solar power, which the US is government taking seriously as an advanced energy system. Still, space-based energy would require massive satellites orbiting Earth. Space entrepreneur Elon Musk and others have criticized space-based energy for a simple reason: the cost of delivering such systems into space would overshadow any benefits gained in terms of energy density.

Lunar Power: How It Could Work

During Project Apollo in the 1970s, Dr. David Criswell, of the University of Houston, was researching how best to utilize lunar materials. He discovered that all the materials needed for manufacturing photovoltaic cells were present in lunar rocks and dust.

In other words, no bulk materials would have to be boosted from the Earth’s surface into space. Instead, space-energy firms could send equipment to the moon whose job would be to manufacture more equipment, such as excavator and ore processing machines and specific-task robots. A high school student in California recently published a paper in New Space describing a self-replicating, robotic factory that could autonomously manufacture solar panels from lunar materials.

Criswell’s idea may have been dreamy back in the 70s, but by the 80s all of the technology for building the equipment, robots, and massive amounts of PV cells on the moon had been invented.

To be sure, the lunar solar arrays would be enormous, but the photovoltaic cells themselves could be tissue thin, since the moon has no weather or air.

Consider also that half of the moon is in sunlight at any one time, so it’s clear why Shimizu wants to ring the moon with arrays. Such a system could provide the needed 24 TW of energy, or more. But how might LSP compare with Earth-based solar, which, after all, requires no rocket launches at all?

Almost weekly, we hear about a new photovoltaic electric plant. Morocco recently completed the first of three phases of what will be the largest solar thermal power plant on Earth.

The Moroccan plant is at the edge of the Sahara Desert, but even the Sahara receives heavy rainfall, or sandstorms that reach hurricane velocities. Thus, Earth-based systems have to be reinforced with glass and metal, which translates into money — so much money LSP becomes more pragmatic as you scale up to multiple terawatts.

In an economic assessment of LSP, which Criswell updates continuously with respect to current trends in Earth-based solar power, such a system would cost something on the order of half a trillion dollars to build. Earth-based solar for multiple terawatts would cost about five times as much.

With an LSP system in place, new beams could be added continuously for additional customers buying into the power, and receivers anchored to earth would be cheap and low tech. The community linking into space power would place its receivers in a designated safe area, and the beam system would be issued new programming to feed the new receiving zone.

Plus, building LSP would yield the added benefit of an infrastructure on the moon, including a human-occupied lunar base that could grow into a colony and serve as a staging location for missions deeper into space, including human exploration and colonization of Mars.