How the Tobacco Plant Outwitted the Hawkmoth 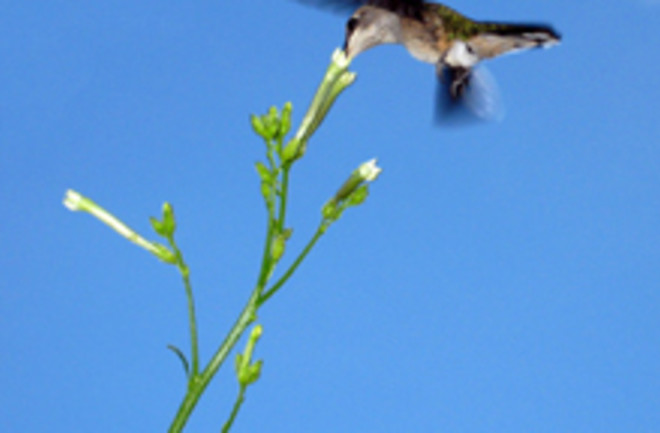 It always helps to have good timing. And no one seems to understand that better than the tobacco plant Nicotiana attenuata,

which grows in Western United States and flowers at night [The New York Times].

Normally, the tobacco plant is pollinated by hawkmoths that visits its flowers every night. But when these hawkmoths leave eggs behind that develop into leaf-chomping caterpillars, the plant's self-defense snaps into place and switches to flowering in the day. That attracts a different pollinator, the hummingbird. Ecologist Danny Kessler noticed this change when he was trying to get a picture of the plant being pollinated for a study. He saw that the plant was not just flowering in the day but also that they had changed their flowers to make them more attractive to hummingbirds:

they emitted less of a chemical that attracts moths; they had less sugar in the nectar, which is the way hummingbirds prefer it; and they were more tube-shaped, making them friendly to a hummingbird's long, thin beak [ScienceNOW Daily News].

Kessler and his colleagues at the Max Planck Institute, including ecologist Ian Baldwin, wondered if this change of flowering time and pollinator had anything to with being eaten by caterpillars. They decided to check it out.

He [Kessler] put caterpillars on plants that had not been attacked and found that after 8 days, 35% of their flowers opened in the morning--compared with 11% on unmolested plants. Plants responded the same way when Kessler wounded the leaves and put caterpillar spit on them [ScienceNOW Daily News].

Their results were published in Current Biology.

The researchers said the plant's responses show it remains hyper-alert for voracious caterpillars, while other scientists note that these alterations suggest that plants can adapt their flowers to suit changing conditions. It also makes us think differently, say the researchers, about how to deal with pests that attack plants. Instead of just spraying bug-spray, they point out that there may be other ways to deal with the problem--making a plant less attractive to the mothers of the predators, for example [ScienceNOW Daily News]. Related Content: DISCOVER: Talking Plants 80beats: Real-Life Killer Tomatoes? Carnivorous Plants May Be All Around Us 80beats: Orchid Lures in Hornets With the Smell of Bee Fear 80beats: Non-Slip Cells on Flower Petals Help Bees Get a Grip 80beats: Tobacco Plants Control Pollinators by Dosing Their Nectar With NicotineImage: Danny Kessler

Fungi Are Capturing More Carbon Than We Thought