How the Elections Matter (and Not), in Five Simple Graphics 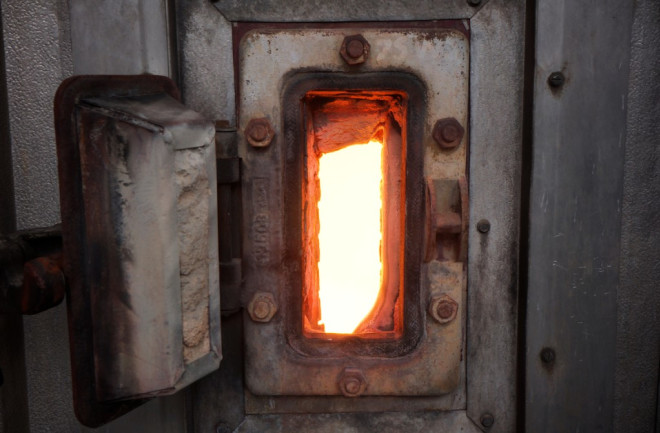 The view into the coal-fired furnace at Xcel Energy's Valmont Power Station in Boulder. Limiting the risk of dangerous climate change will require that we phase these out and triple our use of zero- and low-carbon energy sources. (Photo: © Tom Yulsman) | See update below | As expected, Republicans gained control of the U.S. Senate, as well as a good number of governorships, in the midterm elections yesterday. And not surprisingly, even before the votes were tallied some commentators were predicting that a Republican victory would be a disaster for the environment in general, and efforts to grapple with climate change in particular. As Ari Ratner at Vice put it yesterday:

These races — and many more— will decide how the country generates and consumes energy. They will dictate the preservation of our natural resources, and the environmental legacy that we all will inherit.

So let me get this straight: Now that we have an even more politically polarized government than before, with Republicans in control of both houses of Congress and a Democrat in the White House, suddenly we'll see less gridlock than we have in the past? In case we didn't already have enough reasons to end the gridlock, a report published Sunday by the Intergovernmental Panel on Climate Change highlighted the pressing need to slash human-caused emissions of carbon dioxide and other climate-altering greenhouse gases. Like those spewing from the furnace of the Valmont Power Station near where I live, pictured at the top of this post. More specifically, the IPCC noted that holding the increase in global average temperature to less than 3.6 degrees Fahrenheit, or 2 degrees Celsius, above the preindustrial level would require rapid improvements in energy efficiency and at least a tripling in how much of the world's energy comes from zero- and low-carbon energy sources by 2050. These include renewables, nuclear energy, and fossil fuel energy with technology for capturing and storing carbon emissions. By 2100, carbon-free energy must make up 90 percent of the world's energy mix. (Michael Weiss, one of the ace masters students in a class on blogging that I teach at the University of Colorado has written about this. Check it out here.) |Update 11/5/14 10:30 a.m. MST: Roger Pielke, Jr., the director of the Center for Science and Technology Policy Research and my colleague here at the University of Colorado emailed me to point out that getting to 90 percent zero/low-carbon energy by 2100 will require "shutting down a Valmont-sized plant (or 2) every day and replacing it with a nuclear power plant (or equivalent low-carbon)." That is indeed a tall order. |  The Obama administration seems to understand the need for action. And in all likelihood, it will continue to press ahead with regulatory efforts, such as the EPA's proposed rule for limiting carbon dioxide emissions from coal-fired power plants. And Republicans will try to stymie action with language attached to important legislation on such things as defense spending. But over the next two years, do you think these political machinations will have much effect on this, one way or the other?:

Source: BP Statistical Review of World Energy 2014. Or this?:

Source: IPCC Working Group III Despite recent decreases in carbon emissions by the United States and Europe, the global picture obviously continues to get worse — at an accelerating rate. And in the short run, the outcome of the midterm elections will neither "decide how the country generates and consumes energy," as Vice's Ari Ratner argues, or have any effect on these trends But while these two graphics make it look like limiting the risks of climate change is a hopeless endeavor, consider again what the IPCC says is required: a tripling, more or less, of our use of zero- and low-carbon energy sources by 2050. That will surely be challenging, but that number doesn't seems impossible. And here is one way that the elections two years from now could have a very big effect: Accomplishing the tripling will require much larger R&D investments. As Andrew Revkin points out in at DotEarth today:

...without a substantial boost in basic research and development and large-scale demonstration projects related to technologies like mass energy storage, capturing and storing carbon dioxide, grid management and a new generation of nuclear plants, it’s hard to see timely progress.

So how are we doing? Not so great:

OECD countries’ spending on RD&D as a share of total R&D budgets. (Source: International Energy Agency) Among the 34 OECD nations, research and development spending on energy has been dead last — and mostly flat. Here's the how energy R&D stacks up in the United States:

Source: AAAS How we choose to spend public money speaks more loudly about our national priorities than any individual politician. And it is clear from these graphics that we haven't yet heeded what scientists are telling us about the risks of climate change. Not even remotely close. But here is also where elections could matter — if only enough politicians would stop bloviating about making the future better for our children and actually put our tax money where their mouths are.