How Did 5,500 Miles of Seaweed Spread Across the Atlantic? Researchers Still Aren’t Sure 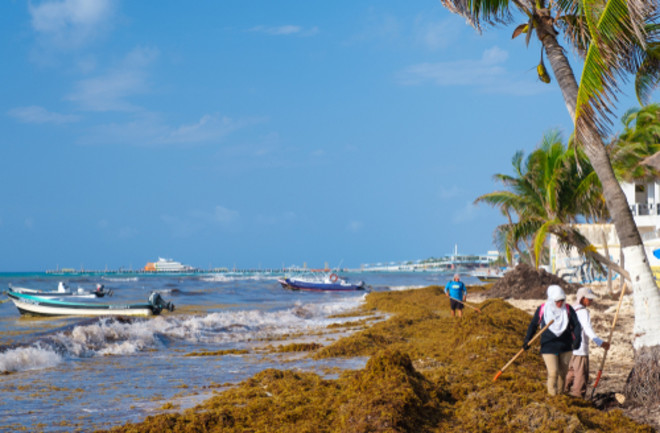 Marine scientist Mengqiu Wang is no stranger to questions about the forecast. The seaweed forecast, that is.

Wang, a researcher at the University of South Florida, is one of the scientists who tracked the largest seaweed bloom in history – an expansive 5,500 mile cluster that stretched from the Gulf of Mexico to the shores of West Africa in 2018. It was documented in a report published in the journal Science on July 5.

But now enormous piles of Sargassum weed, a smelly, yellow algae, are once again washing up on beaches this summer. So it’s no surprise to Wang that people are curious as to how bad it will be this year. Luckily, it’s not poisonous, but it can clog up shores and reek of rotting eggs when it starts to decay.

Sargassum is already piling up on beaches in Mexico, Florida and the Caribbean Islands. And in the new report, researchers say that this high volume of seaweed may be the “new normal.”

But how did this massive bloom spread in the first place? The study authors have ideas, but there isn’t just one factor that may have caused Sargassum to stretch from one end of Atlantic to the other.

Sargassum is native to the Sargasso Sea – the northwestern part of the Atlantic Ocean, named for its signature flora. It’s a relatively calm part of the Atlantic, and has even caused thousands of pieces of trash to accumulate in what’s known as the North Atlantic Garbage Patch because of the weak currents.

But circling the Sargasso are strong currents that push ocean dwellers –seaweed included – between Africa, North America and South America. The Sargassum bloom follows the Antilles Current and thrives in saltwater, which allows it to grow over such a massive span.

But the current is just one part of the equation. When the water isn’t salty enough, or too hot, or there aren’t enough nutrients in the ocean, the seaweed suffers. Feeding the bloom is a delicate balance, but all the factors lined up in 2011, when this so-called Great Atlantic Sargassum Belt was first observed by NASA satellites.

The Great Atlantic Sargassum Belt as mapped by a NASA satellite between 2011 and 2018. (Credit: University of South Florida)

Wang says this was probably due to a large deposit of Sargassum seeds left in the water during the previous year. That, coupled with nutrients from runoff pouring out of the Amazon River, as well as some from the coast of West Africa, are likely the biggest factors that fed the massive, ocean-spanning cluster we see today.

Coming to a solid conclusion on Sargassum growth wasn’t in the cards this time, but Wang and co-author Chuanmin Hu say they’ll continue studying those factors that they suspect play into it.

Overbearing quantities of seaweed cause problems for humans and marine life alike, but the effects are still not fully understood. In open water, Sargassum provides valuable shelter for turtles, crabs and fish. But near shores, it can suffocate marine life, like coral and baby turtles.

One big question is how well Sargassum grows in different environments. Wang says the team plans to collect samples from the bloom in different parts of the world to measure nutrient levels. Looking at factors like light, water temperature, salinity and pH might also give clues as to what’s feeding the weed.

The team also plans to study the bloom’s effect on ocean ecology and to find better ways to predict how much Sargassum will grow so that people can prepare. But the massive scale and density of the bloom is a tricky factor.

“It’s a combination of the biological growth and the physical accumulation,” Wang says. “So that makes it harder to study.”

Every summer between 2011 and 2018 the seaweed patch got bigger – except in 2013, when the bloom barely showed up on the NASA satellites. Wang says this could have possibly been due to lower salinity in the water, a lack of seed deposits from the previous summer and a lack of nutrients that year.

“It’s not just a simple relationship,” she says.

And its growth could fluctuate in the future. As the bloom expands, it will leave behind more seeds every winter. That doesn’t mean they’ll all grow though, depending on the conditions the following year. But Wang says there likely won’t be another summer like 2013, where the bloom seemed to vanish from satellites.

So, the forecast? Expect seaweed — lots of it.