How Climate Change is Threatening the 'Living Skin' of the Desert 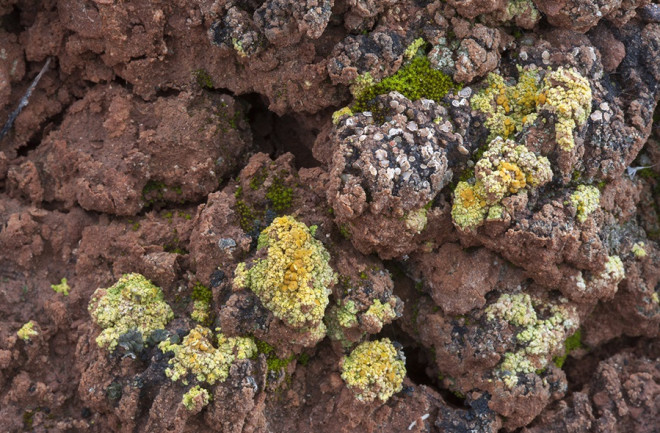 On a cool September morning, a caravan of international scientists rumbles past the iconic formations of Canyonlands National Park in Utah. Over the eons, wind and water have carved this landscape into a maze of stunning red sandstone arches and spires. The researchers marvel at the formations, so different from their own backyards — places as distant as China, Niger, Australia and Spain. But when they pull into the parking lot for a short hike to Pothole Point, their attention goes straight toward their feet.

A thick, bumpy film covers large patches of the giant sandstone slabs. The patches resemble burnt soil, as if a fire left behind only these charred remains. Up close, the spots mimic the Canyonlands’ topography on a tiny scale: Centimeter-tall towers rise above a network of valleys. These dark, crusty soils span the arid Colorado Plateau in the Four Corners region.

Here, the ground is alive.

Biological soil crusts, or biocrusts, are crammed with communities of tiny photosynthetic organisms and other life-forms. Biocrusts in some parts of the world are mostly cyanobacteria, one of the oldest microorganisms on Earth. Other biocrust communities, like these on the Colorado Plateau, include mosses, lichens and fungi. The first scientists to study them called these living crusts “cryptogamic” — Greek for “hidden marriage” — because their inner workings were still mysterious. And while they might seem secretive, biocrusts are critical to healthy drylands around the world. But now, ecologists are worried that a changing climate will put them in jeopardy.

Drylands cover nearly half of the world’s landmass and sustain more than 2 billion people. Biocrusts are important components of these arid ecosystems. When it does rain — and in the desert Southwest, summer rains come in monsoonal downpours — those peaks and valleys on the soil surface help retain the water. That both improves water absorption and reduces erosion. Biocrusts also add nitrogen and carbon to the nutrient-poor soil, a critical service for plants. And, perhaps most importantly, the cyanobacteria’s sticky slime and the root-like filaments of the mosses help bind soil to earth.

“The wind can whip through this ecosystem, almost knock you down, and this crust is going to stay 100 percent solid,” says Sasha Reed, a research ecologist with the U.S. Geological Survey (USGS) Southwest Biological Science Center in Moab, Utah.

Despite their resilience to wind, biocrusts crack under pressure. When hikers, bikers and vehicles stray from established paths, or livestock roam, they can leave a trail of bare earth where crusts used to live. Then, when the wind blows, those areas kick up sand.

“That dust is going to enter the atmosphere,” says Reed. “It’s fertility leaving. It’s going to be deposited elsewhere.” And when dust from Utah settles on Colorado’s snow-packed Rocky Mountains, those dark-colored sand particles speed up spring snowmelt by absorbing more solar energy.

Because of the limited water of desert ecosystems and other factors, it can take a long time for these disturbed areas to recover. In the best-case scenario, cyanobacteria will recolonize the soil in five years or so. It takes another 20 years for a community rich with lichens and mosses to establish. In very dry places, like California’s Death Valley, scientists say full recovery takes up to 250 years. And alarmingly, recent studies show climate change can wipe out biocrusts just as surely as physical disturbance.

Some 12 miles northeast of Moab, a thin electric fence partitions a mesa overlooking the Colorado River. Inside are 20 experimental plots where USGS researchers are simulating future climates to learn how biocrusts might respond.

Infrared lamps overhang some sections, keeping them consistently 7 degrees Fahrenheit warmer than the control plots. Other plots get regular doses of misted water. Some receive both. This allows scientists to look at the individual factors of warming and precipitation, and also study how those two factors might interact.

“We know the temperatures are going to increase,” says Jayne Belnap, a USGS ecologist and biocrust research pioneer. “Precipitation, that’s a lot more variable, and people don’t really know what’s going to happen.” The future could bring light, regular rains. Or we might see more frequent heavy rainfalls. Or perhaps less frequent, but even larger, storms.

A test plot used by the researchers to measure how biocrusts respond to climate change. (Credit: Jennifer Lavista/USGS)

Reed stands by a plot hit with both heat lamps and light, regular water treatments. The ground looks trampled. It’s surprising that just a little water could cause this kind of damage. Reed and Belnap think the water gives the crusts just enough moisture to rev up metabolism, but not enough to replace the energy they’ve used, especially as heat speeds up evaporation.

What’s troubling is how quickly the warmed and watered crusts disappeared — they were barren in less than a year. “You can tell right away which ones got watered,” says Belnap. “Everything used to look like that over there,” she says, pointing to a distant control plot with visible, thick crusts.

“It was stunning and disappointing and somewhat gut-wrenching,” says USGS researcher Scott Ferrenberg, the lead author on a paper analyzing data from these experiments.

Other researchers, like Fernando Maestre, a professor at Rey Juan Carlos University in Spain, are doing similar experiments in other parts of the world. Nearly 75 percent of Spain is classified as drylands. “Climate models predict really, really high warming for Spain, particularly during the summer. And summer in Spain is already really hot,” he says. “We need to know what is going to happen before we can think of ways of mitigating it.”

Maestre’s experiments are showing results similar to those from USGS.

The future doesn’t look good for biocrust communities, and thus for the stability of desert soils, as we continue to careen toward a warmer climate. But researchers still hold out hope. “We’re trying to turn to a more optimistic phase to see if there’s some way we could help these communities to return,” says Ferrenberg. Several universities are trying to culture biocrust organisms in greenhouses and reintroduce them to damaged landscapes. Results are mixed so far. In China, government scientists sprayed a cyanobacteria-loaded slurry over growing sand dunes and stopped their advance. But recent experiments in New Mexico and Utah have been hit-or-miss, and it’s not clear why. “The jury’s out in terms of restoration and how much success we might have in the face of climate change,” says Ferrenberg.

Scientists are also exploring assisted migration, a controversial topic in ecology where species are moved from a place they currently thrive in to places they might survive as the globe warms. The Moab USGS team just began a new “common garden” experiment to see which crust communities might fare the best in a warmer Utah. They gathered crust samples from different ecosystems across the Southwest and grew them in a greenhouse at Northern Arizona University. Early this year, the team spread those samples in adjacent Utah plots. Similar to climate manipulation plots near the Colorado River, half of these plots are warmed with infrared lamps to simulate the future.

“Right now, the plots look like sand with confetti colors. So, we’re waiting to see how those communities take shape over time,” says Reed. If the native crusts can’t withstand the expected warming, maybe the crusts already adapted to hotter deserts could.

In the end, perhaps preserving the biocrust’s ecosystem function is more important than preserving species native to the Colorado Plateau.

Katherine Mast is a science writer in Santa Fe, NM. This story originally appeared in print as "The Desert's Living Skin."