How and Why It's Weird Outside — In Six Images 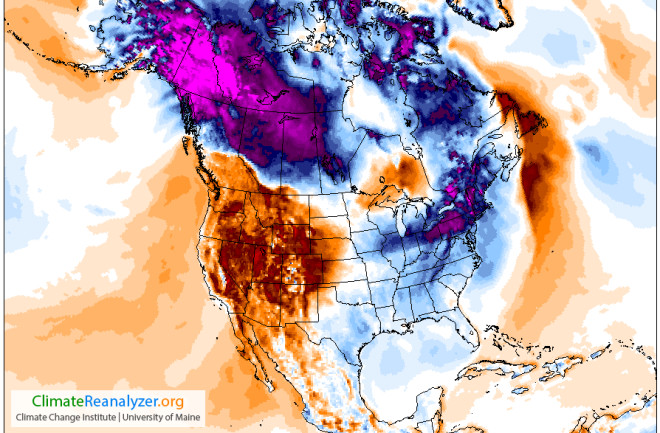 From KIEM TV: "Fifteen families have been stranded and several students relocated after weather related washouts and slides hit the North Coast. Fox Creek in Carlotta destroyed part of a private road taking out pavement and creating an almost 20 foot gap where that road used to be. It left families wondering what to do."

Yes indeed, it sure seems weird outside. But if you need additional evidence, check out this photograph:

Ice floes on the Hudson River? Really? (iPhone photograph courtesy Claire Cornish) My friend Claire Cornish shot this photograph with her iPhone on Friday along the shore of the Hudson River just north of New York City. In the distance, you can see the George Washington Bridge and Manhattan's tall buildings. And yes, those sure do look like ice floes... What's going on? The map at the top of this post gets at it, in graphic form: Weirdly warm in the West, and freakily frigid in the East. But why? This graphic shows why:

Winds at about the height of the jet stream, as forecast for Feb. 6, 2015. One meander in the jet stream has created a high pressure ridge over the Western United States, resulting in high temperatures there. Another meander has led to a low pressure trough resulting in cold temperatures in the Northeast. (Source: earth.nullschool.net) Blame it on a meandering pattern of the jet stream with an associated high pressure ridge bringing warmth to the West, and a low pressure trough allowing Arctic air to infiltrate the Northeast. Meanwhile, large amounts of precipitation are starting to fall over parts of the water-starved West Coast. What's up with that?

Total precipitable water over the eastern Pacific Ocean. (Source: SSEC, University of Wisconsin.) The animation above, depicting a measure of moisture in the atmosphere called "total precipitable water," shows what's up: A veritable firehose of atmospheric moisture stretching from Hawaii to the West Coast. This is a classic "Pineapple Express," a flow of low- and mid-level moist air that can last several days. The result can be extremely heavy rains across coastal California, Oregon, and Washington. And that is, in fact, the forecast for the next three days:

Precipitation forecast for the next three days, in inches. (Source: National Weather Service) Check out those red, orange and magenta colors over Northern California, Oregon and Washington! That's a lot of precipitation, including a whole lot of snow over the northern Sierra Nevada mountain range east of the California coast. This is good news indeed for California, which has been gripped in an historic drought. The Pineapple Express phenomenon brought lots of moisture to California back in December, but then the rain and snow petered out and California's misery grew. Time will tell whether this is the start of a more persistent pattern of storminess. Let's hope so. Lastly, check out that precip forecast map again. See that blue patch over New York and New England? I think we need a new dateline entry: Dateline —Boston, Mass.,Feb. 7:

From WCVB TV in Boston: "Winter-weary New England is bracing for another round of snow. The National Weather Service has issued a winter storm warning for almost all of Massachusetts, as what is forecast to be a long-duration storm will last from Saturday night through Tuesday morning."

We're talking up to 15 inches of snow for winter-weary residents of the Northeast. Well, it is winter. But still. The whole picture really does look weird... Oh, wait! — I almost forgot:

Source: Climate Prediction Center The weirdness, at least the warm/cold dichotomy, may return and stick around for awhile. The image above shows the forecast for which parts of North America are likely to experience warmer than normal temperatures (red colors – duh!) between Feb. 14 and 20, and which are likely to be gripped by colder than normal temperatures. As the map shows, in all probability it will be warm in the West and chilly in the East. So what else is new?