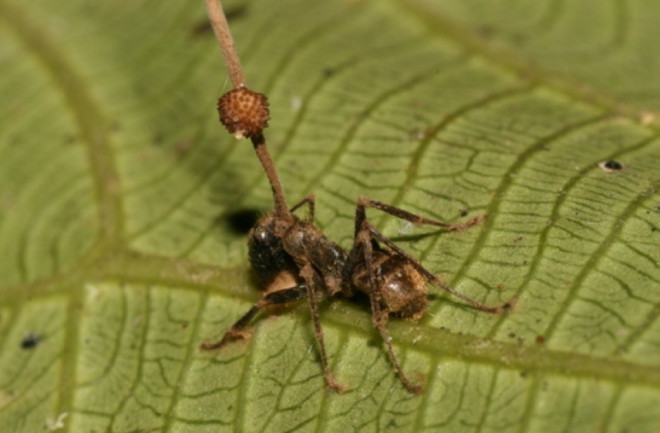 An ant infected by a cordyceps fungus with a stroma emerging from the back of its head. (Credit: David P. Hughes, Maj-Britt Pontoppidan/Wikimedia Commons)

Ants, moths, grasshoppers, wasps and hundreds of other species of insects regularly fall victim to a deadly parasite that hijacks their bodies and brains, causing strange behaviors and eventually leading them to their deaths.

A fungus called a cordycep is the culprit — and there are about 400 species of it in the wild, each one adapted to infect a different type of insect. In carpenter ants, the sickness causes a signature “death grip,” where the ants lose the ability to control their jaws and bite with overwhelming force on a leaf until the parasite sucks the life out of them. Then, the fungus sprouts out of their bodies and erupts into a shower of active spores that can infect other ants close by.

It’s so deadly that the ants actually know to avoid it – on an episode of BBC’s Planet Earth, videographers captured ants carrying an infected colleague far away from the others. The fungus has the ability to wipe out entire colonies, so it’s in the best interest of these bugs to steer clear.

Human knowledge of the killer fungi isn’t new, but scientists are still trying to understand exactly how the fungus infects its hosts. A new report published Wednesday in the Journal of Experimental Biology examines the infection in carpenter ants to home in on exactly how the fungus takes control of ant bodies with such chilling force.

It’s in the Mandibles

Curiously enough, the study found that the infection actually leaves the ants’ nervous systems alone. Instead, the fungus, known as Ophiocordyceps unilateralis, mangles the ant’s jaws, causing the signature death grip that seals their fates.

The research team housed several colonies of ants in a lab, infected some groups with the fungus, and watched as the ants became sick and ferociously clamped down on any object they could find.

Control groups were infected with a separate fungus, Beauvaria bassiana, which also kills ants, but does not induce a death grip. They compared their bodies via dissection and electron microscopy.

The fungus seems to attack the ants jaw muscles specifically, they found, causing them to hypercontract, or bite with as much force as they can muster, and never let go. They also found additional cells that proliferate after an infection, which Pennsylvania State University researcher and lead author Colleen Mangold says is a tempting target for future research.

In addition, some muscles in the jaw eroded during the infection, although researchers aren’t sure if it’s directly due to the strong grip. However, other research has pinpointed an interesting change specifically in O. unilateralis-infected ants after the muscle breakdown. In the fungus, they observed an increase in the expression of genes associated with ergot alkaloid secretion.

Ergot is a rye fungus known to create hallucinations and convulsions in mammals. So, the strange, zombie-like behavior in ants may be due to these insects getting high off of toxic spores — but the research team needs to conduct further studies to confirm if this is true.

Could this life-sucking parasite be a foreshadowing of a coming apocalypse in humans? The concept isn’t unheard of in science fiction — a video game released in 2013, called The Last of Us, already theorized a rogue strain of cordycep infecting humans like it does to insects.

But as far as a full-on zombie invasion, Mangold says you don’t have to worry about the possibility of O. unilateralis jumping ship.

“It’s strictly an ant problem for sure,” she says.

In fact, humans do have an interesting relationship with cordyceps, but it’s not a parasitic one. The fungus has been used in Chinese medicine for centuries and is still valued for its purported healing properties. You can buy cordyceps as a supplement and some research even suggests they could be good for your immune system and kidneys.

So the only time cordyceps might get in your body is if you’re consuming them – not the other way around.