How a Sprinkling of Freshwater Can Intensify a Hurricane's Fury 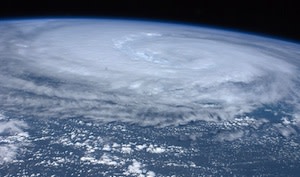 [pdf], in part because although meteorologists can easily use satellite data to track a storm and predict its landfall, predicting a storm's windspeed, or intensity, is notoriously difficult. Keeping track of the saltiness of the ocean beneath a hurricane may refine predictions, though: A new paper shows that an influx of freshwater can increase a hurricane’s intensity by almost 50 percent

. When a tropical cyclone passes over the ocean, its strong winds churn up the waters, pulling cold seawater up to the surface. This mixing process cools down both the ocean and the hurricane, and because the storm feeds on heat, it reduces a hurricane’s intensity. But sometimes, something blocks that cold water from reaching the surface. That something is freshwater from a large river system or a heavy rainfall rushing into the ocean. The influx forms a “barrier layer” that extends about 55 yards down, keeping the coldest water from rising. This team of oceanographers and atmospheric scientists studied recorded data on hundreds of tropical cyclones and the oceans they traversed, including the water’s temperature, saltiness, and density. They found that a storm passing over a barrier layer cooled only two thirds as much as the tropical cyclones that stay over purely salty seas. And that extra heat can boosts a hurricane’s intensity---on average, by 50 percent. So instead of merely monitoring a storm from above, we may want to also keep tabs on the ocean below.