Soon I'll be putting up my second HuffingtonPost entry on "Why Global Warming Tipped." (For the first entry, which has gotten 50 comments at last glance, see here.) In the meantime, though, I'd like to republish the fascinating figures that I used at HuffingtonPost, both of which arise from Nisbet's research and are part of the Speaking Science 2.0 talk. Here's the first (for a high resolution version see here): 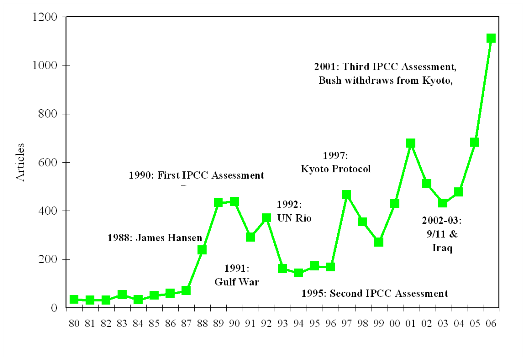 This depicts the volume of attention to global warming over time at two agenda-setting newspapers, The New York Times and The Washington Post (presumed to be broad indicators of media coverage patterns). Data from the Lexis-Nexis database. Much food for thought, eh? The peaks and valleys are not exactly what one might have assumed from a scientific perspective. For further analysis of the data here see the Huffpost. And then here's the second figure, which also appears on p. 151 of Storm World: 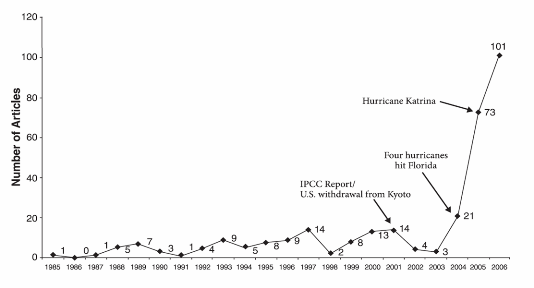 Using a similar methodology, this depicts the volume of attention just to the relationship between hurricanes and global warming at the same newspapers. Once again, coverage patterns are correlated with relevant events. Once again, further explication of the data can be found at the Huffington Post. As a journalist, it sure does feel good to use some actual DATA now and again--even if I didn't originally compile it. The upshot: In the media, as on the planet generally, things are warming up....and in the media, hurricanes are a significant part of the reason.