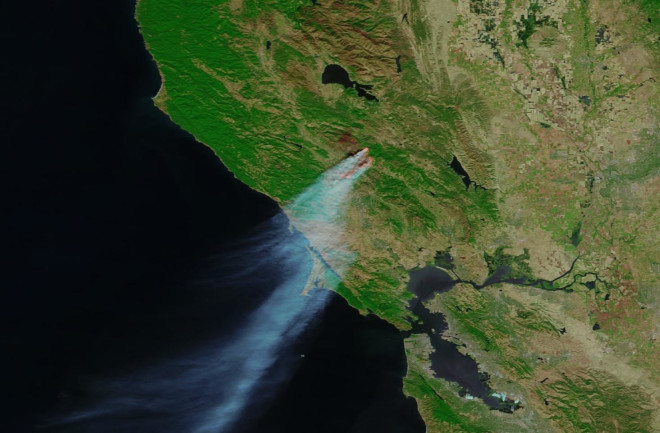 The view of the Kincade Fire from space, as seen by NASA’s Terra satellite on Sunday, Oct. 27, 2019. The false-color image shows areas of active burning in orange, and land that has been scorched in dark red. (Source: NASA Worldview)

Northern California is bracing for winds forecast to gust as high as 80 miles per hour on Sunday morning — posing extreme wildfire risks in an area primed to burn.

“A potentially historic, long duration, extremely critical offshore wind event is forecast to occur beginning around 8 pm tonight and persist through early Monday,” according to the National Weather Service. These winds threaten what the weather service describes as “explosive fire growth potential.”

The GOES-16 weather satellite captured this view of smoke streaming out over the Pacific Ocean from California’s Kincade Fire on Oct. 24, 2019. (Source: RAMMB/CIRA/SLIDER)

Thanks to this dire situation, a dramatic expansion of the Kincade Fire — now nearly twice the size of Manhattan — is in the offing. And any new ignitions could be whipped into new infernos.

As I’ve been writing this post on Saturday, evacuation orders have been issued for the entire towns of Healdsburg and Windsor as well as other areas, affecting 50,000 people. Winds are expected to blow the Kincade fire in that direction.

Pacific Gas and Electric has announced plans to cut power to as many as 850,000 customers across a wide swath of Northern California. The goal: lower the sparking risk from downed power lines.

The incident map for Sonoma County shows the perimeter of the Kincade Fire as of Oct. 26, 2019, plus areas under mandatory evacuation orders in pink, other areas that could soon face evacuation in blue, and the possible power shut-off area in yellow. For the latest interactive version, click on the map. (Source: California Department of Forestry and Fire Protection)

The Kincade Fire, now at 25,455 acres and only 10 percent contained, began on Wednesday. It has since destroyed 49 residential and other structures.

“The task is monumental,” says Jonathan Cox, a spokesman for the California Department of Forestry and Fire Protection, quoted in the New York Times. “We are throwing as many resources as we can at it, but we also have to plan for the worst.”

More than 2,000 people are battling the Kincade Fire.

After it ignited on Wednesday, the blaze was whipped up quickly by strong winds. By Thursday, the smoke plume had blown more than 375 miles out over the Pacific Ocean, covering an area of approximately 30,000 square miles.

That’s a little larger than the entire state of Maine.

The Kincade Fire on Oc. 24, as seen by the GOES-17 weather satellite images. (Source: RAMMB/CIRA)

I started this post with a view of the Kincade Fire from the GOES-16 weather satellite. It’s sister, GOES-17, has a perspective to the west. It acquired the images that make up the animation above, also on Oct. 24.

Please check back for updates and new remote sensing views as this dangerous situation evolves.