Once at risk from salvage and plunder,these shipwrecks are preserved in placeas historical treasures for all. 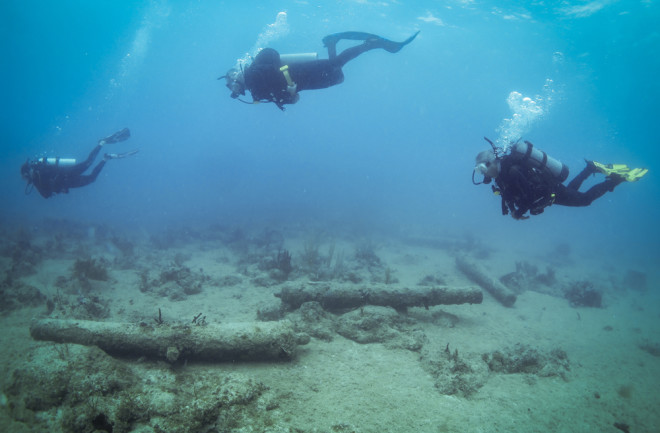 People who value historic shipwrecks have often wanted to raise them for preservation and display in museums. Charlie Beeker has a better idea: bring the museum to the wreck.

Beeker, director of Indiana University’s Office of Underwater Science in Bloomington, started diving in 1963, a time when historic shipwrecks had no value beyond exploration and salvage. The dive magazines of that time, replete with tales of treasure hunting, glamorized the looting of shipwrecks. When Beeker took a diving instructor course in Key Largo, Fla., in the 1970s, divers had damaged most of the Florida Keys’ historic wrecks. Artifacts such as cannons and anchors became ornaments at marinas, hotels and restaurants along U.S. Highway 1.

Preservationists called for changes and began to float the concept of underwater museums as a way to protect wrecks and keep artifacts in place, but the idea didn’t gain real traction until the passage of the Abandoned Shipwreck Act in 1988. Beeker was on the committee that helped draft the legislation, which acknowledged the value of historic wrecks and clarified the ownership and management of them on federal, state and tribal submerged lands.

The following year, Beeker helped establish the San Pedro Underwater Archaeological Preserve in Florida, and he went on to play a role in creating 11 more underwater parks in Florida and California. By 2009, a national system of marine protected areas was established under the auspices of the National Oceanic and Atmospheric Administration to preserve the shipwrecks, elevating them from plunder to historical treasures.

But that failed to deter some treasure hunters, who simply moved to the Caribbean, where the pickings are easy and plentiful. For instance, in the Dominican Republic, treasure hunters are allowed to plunder wrecks so long as they split the take with the government. So Beeker began to focus his efforts there as well.

Since 2008, Beeker and his colleagues have been collaborating with the government’s ministries of environment, culture and tourism and the U.S. Agency for International Development. Together they have established living museums of the sea, such as the Guadalupe Underwater Archaeological Preserve and the 1699 Captain Kidd Living Museum of the Sea, with several more in the works. The Captain Kidd shipwreck contains in situ archaeological material, while the others comprise artifacts that were raised from the sea in the past and subsequently returned there.

The museums feature mooring buoys for boats, historic-marker buoys and underwater plaques with interpretative information. Visitors are admonished to “take only photos, leave only bubbles.” The museums increase cultural heritage tourism, which, in turn, stimulates economic development, providing the Dominican Republic with a sustainable alternative to treasure hunting.

Beeker takes an expansive approach to shipwreck preservation. “We’re making an archaeological project an environmental project,” he says. “We have a holistic view of the resource.” That view entails preserving the ecosystem around the wreck as well as the wreck itself. Large artifacts, such as cannons and anchors, provide hard substrate and rugosity that create an ideal habitat for corals, fish and other biota.

Beeker’s success in the Dominican Republic hasn’t come easily, and he acknowledges there are plenty of people who want him to fail. Treasure hunters have sued him — one even confronted him in a bar. (Beer bottles were flung, and police were called.) Local fishermen complain that the underwater museums interfere with their business. Working with foreign governments can also be difficult, particularly those easily seduced by the promise of treasure hunters’ booty. But Beeker is quick to remind them, “You can only sell it once as a treasure hunt. I can sell it forever as a park.” And what parks they are.

Carrying a load of quicksilver and 600 people, she set sail in 1724 from Cádiz, Spain, to Veracruz, Mexico. The Guadalupe ran aground and sank in a reef off the coast of the Dominican Republic during a storm. More than half the passengers made it to shore.

Salvors recovered many of the Guadalupe’s artifacts, the most important of which were conserved and exhibited in several museums in Santo Domingo. But the majority of the artifacts were either kept in storage or were not conserved because of a lack of resources. In 2002, Indiana University suggested using some of the latter artifacts, including several cannons, in an underwater museum exhibit that opened that summer.

Located in front of the Viva Dominicus Beach Resort in Bayahibe, the artifacts in the Guadalupe Underwater Archaeological preserve sit at a depth of about 26 feet near a coral reef. The museum is an appealing site for divers, who can see authentic artifacts from a historic shipwreck, and the resort uses it to attract business.

The Captain Kidd Shipwreck Living Museum of the Sea’s dedication took place May 23, 2011, the 310th anniversary of the infamous Kidd’s hanging in London for crimes of piracy. The museum rests in less than 10 feet of water just off the shore of Catalina Island in the Dominican Republic.

Kidd, although sanctioned by England as a privateer, was accused of piracy after he captured the Quedagh Merchant (also known as the Cara Merchant) in the Indian Ocean in 1698. He abandoned the vessel, which he had renamed the Adventure Prize, off the southeast coast of the Dominican Republic. For more than three centuries, it escaped the notice of the many people who searched for it until, in 2007, a snorkeler came upon a pile of concreted cast-iron cannons.

Dominican Republic officials contacted Beeker, who happened to be on the north coast searching for a Columbus shipwreck. (Beeker made the news in May 2014 for analyzing artifacts suspected at the time to have come from Columbus’ Santa Maria.) Beeker and his Indiana University colleagues received international media coverage when they confirmed the Kidd wreck in 2007. Beeker and his team discovered 26 guns, three anchor crowns and part of the lower hull, among other artifacts.

Like all living museums in the sea, the Kidd shipwreck protects biological resources — most notably, relatively large populations of elkhorn and staghorn coral — as well as archaeological resources.

Historical accounts have it that in 1725, the Spanish frigate Nuestra Señora de Begoña encountered a violent storm while en route from Venezuela to the Canary Islands. The Begoña — carrying cacao, dyewood, contraband coins and other treasure — diverted to Santo Domingo, where the captain grounded the sinking ship near shore.

In 2010 the Dominican Republic awarded a permit to Beeker and his crew to excavate at a small beach at La Caleta Underwater National Park, where, several hundred feet offshore, they believe remnants of the wreck lie.

Excavating an area closer to the shore, they found many artifacts that likely came from the Begoña, including a cast-iron cannon, a brass wine spigot and examples of contraband precious metals.

The artifacts were extremely fragile and in need of timely conservation. When exposed to air, items made of organic materials such as wood, leather and textiles can quickly degrade. Metal artifacts quickly corrode.

The artifacts are often encased in concretions, which form when sand grains, shell particles, coral and marine plants adhere to submerged articles. During excavations, the archaeologists found Spanish silver coins concreted into the shapes of the sacks that once contained them and recovered a cup attached to a large, unidentified concretion weighing about 100 pounds.

Since 2010, Indiana University, in collaboration with other organizations, has been working to turn the Begoña wreck site into a living museum of the sea.

[This article originally appeared in print as "Museums Under the Sea."]