Hiking 17,000 Miles for Citizen Science and the Environment

Sonya Richmond and Sean Morton are hiking the epic Trans Canada Trail to show us all how to protect nature. 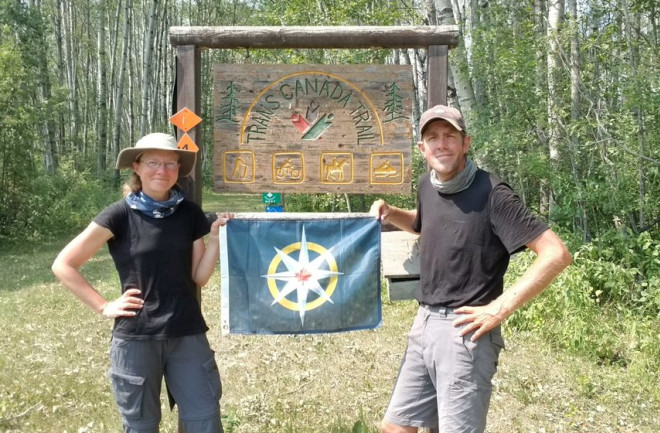 Sonya Richmond and Sean Morton are hiking across Canada, gathering citizen science observations from across the country. (Credit: Sean Morton)

On June 21, 2019, Sonya Richmond and Sean Morton took the first steps on an odyssey that would take them across the second-largest country on Earth. The duo is currently in the middle of a quest to walk the entirety of the Trans Canada Trail, a network of paths that stretches for thousands of miles across the country.

But they’re not hiking to get away from people; in fact, the two say they want to bring as many with them on their journey as possible. By writing blog posts, taking photos and uploading their observations to citizen science app iNaturalist, Richmond and Morton are documenting every part of what has expanded to become a five-year journey across Canada’s diverse natural landscapes.

The goal, Richmond says, “is to inspire other people to fall in love with Canada’s nature and hopefully be inspired to protect it.”

Now on the third year of their trip, the pair has walked more than 4,000 miles so far. Along the way, they’ve seen and documented tons of species of wildlife, camped in sites across the Canadian wilderness and brought the beauty and fragility of nature to countless followers. And with two more years of their journey to go, it’s fair to say they’re just getting started.

Take Part: Get Started With iNaturalist

The decision to hike across Canada came, Richmond says, as she and her partner took stock of the numbing influence of computers and social media on their daily well-being.

“Both of us felt like the digital world was swallowing up our lives,” she says. The pair had already dipped their toes into the world of long-distance hiking, with treks in Portugal, Spain and elsewhere. But, Richmond says, they realized there was exploration to be had right outside their door.

From Newfoundland’s Cape Spear, the easternmost point in continental North America, the two would travel west on a network of trails, roads and waterways that snakes across Canada to the Pacific and then up to the Arctic Ocean. All told, the journey is around 17,000 miles, or about 70 percent of the length of the Earth’s equator. For comparison, the United States’ Pacific Crest Trail, which runs from southern California to the Canadian border, is a mere 2,650 miles long.

Richmond and Morton walk for some eight months out of the year, pausing only when frigid conditions force them to hunker down for the winter.

It’s been a rare opportunity to truly immerse themselves in the world around them, Richmond says. Before they sold their house and quit their jobs to walk the trail, she was a bird conservation researcher, a career born from an undergraduate summer job working with birds.

“I love all birds — I could get excited about a chickadee,” Richmond says.

Now, on the trail, she shares new sightings with followers on iNaturalist. They’ve recently been seeing lots of loons, Richmond says, and she was able to tick off an American avocet and American white pelicans — both rare and exciting finds for her.

With the iNaturalist app, citizen scientist users log and identify species they come across. It’s a way to both help researchers study plant and animal behaviors and populations, and to interact with a wider community of nature lovers. Richmond says they’ve attracted a devoted following on the app, as people watch to see which species they will come across next. iNaturalist has turned out to be particularly eye-opening for kids, she says.

“Citizen science is a fantastic way for young people to connect with nature, because it’s a bridge between the digital world, where many of them have been raised, and the natural one,” she says.

Observations from citizen scientists like Richmond and Morton are giving experts tons of new data to fuel new scientific insights. Their bird observations, for example, might be cluing researchers in to new populations, or pointing out threats to existing ones. And you don’t need to be a trans-Canada hiker to participate. Nature is, quite literally, all around us — you can add your observations right from home.

Beyond the personal and scientific value of traveling and gathering scientific data, Richmond says their trek has revealed deeper insights into how everyone, not just those spending years on the trail, can begin to work to protect the planet.

There are few better ways to get to know a place than by walking through it. It’s there, Richmond says, that environmental conservation needs to start.

Stopping to photograph a butterfly along the trail. (Credit: Sean Morton)

Richmond and Morton plan to wrap up their hike sometime in 2023, when they’ll trek to the far north through Canada’s Yukon and into the Northwest Territories. Whatever comes next, she says, they’re sure it will involve more citizen science. The two are hoping to publish a book of images from their trip after they’ve completed their hike, as well.

Ultimately, Richmond says their takeaway from their hike so far has been a hopeful one.

Ultimately, “everyone wants to have a healthy environment for our children,” she says. “Walking this trail has really shown us there’s a potential to work together for that common goal.”

You can follow along with Sonya Richmond and Sean Morton as they hike the Trans Canada Trail at their website.