Oh, for the days:

Those were worried Australians in the mid-2000s, so it wasn't all that long ago. In the United States, people were really, really worried in the 1980s and 1990s about getting cancer from power lines, thanks in large part to a crusading journalist who had latched on to the story, which I've previously discussed. Naturally, there was a big cover-up, too. (More about that here.) Since then, we appear to have moved on to fretting about Wi-Fi (nuked sperm!) and cell phones. On the latter, some are now wondering: "Do cell phones cause cancer--Or just brain tumors?" Alas, there's no way to know, because despite there being no evidence that cell phones and WiFi cause cancer or brain tumors, like some claim about GMOs, no evidence of harm is not the same as evidence of no harm. That's why some parents don't want their kids in a WiFi zone (at home or school), and why it is suggested that you not sleep with a cell phone under your pillow and women not carry cell phones in their bras. But if you really want to guard against exposure to phone radiation and various electro-magnetic harms, a company will sell you this special "biofield" protecting pendant (cost ranges from $99.95 to $1199.95). 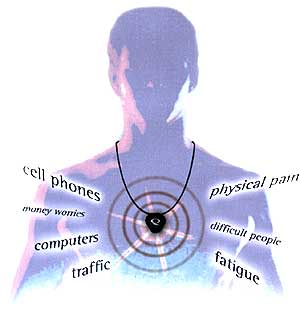 Doctors who tested the QLink Pendant with Sympathetic Resonance Technology™ found that it very quickly amplifies healthy energy states — and decreases energy drains caused by a wide variety of stressors. It is the premier product for strengthening you against direct and ambient sources of EMF [electromagnetic field], including EMF from computers and cell phones.

Electromagnetic sensitivity is not a recognized medical condition, but it is a distinctly modern-day syndrome that probably isn't going away anytime soon.