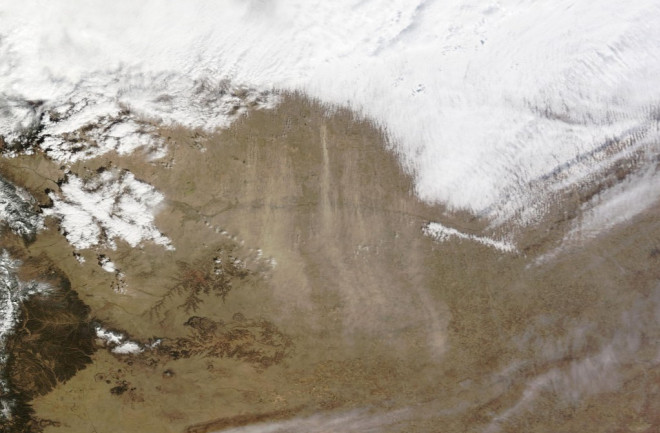 NASA's Terra satellite spied these streams of dust blowing south across Colorado, Kansas, Oklahoma, Texas and New Mexico on March 11, 2014. (Source: NASA) As a cold front blew across parts of the High Plains on Tuesday, winds kicked up a huge and intense dust storm. You can see it in the image above, captured by NASA's Terra satellite. The dust is streaming south out of Colorado and Kansas into Oklahoma, Texas and New Mexico. (Look for the streamers of pale, sand-colored stuff south of the big cloud bank.) With winds gusting to nearly 60 miles per hour, visibility in southwestern Kansas was reduced to zero, according to the Cooperative Institute for Meteorological Satellite Studies. CIMSS also describes a pilot report of severe turbulence at 45,000 feet in the region, possibly the result of the passing cold front. On the ground, a towering wall of dust known as a haboob rushed across a vast swath of the High Plains, enveloping towns and cities in a brown pall.

The photo above, posted to Twitter, was taken from an airplane flying near Amarillo, Texas, apparently at 38,000 feet. And here's the High Plains haboob enveloping Clovis, New Mexico:

The winds associated with the south-moving cold front are simulated in dramatic fashion in this screenshot from an earth.nullschool.net visualization:

Surface winds associated with the cold front blast to the south across a large part of the U.S. midsection on March 11, as seen in this visualization based on data from supercomputer forecast models. (Source: earth.nullschool.net) The cold front winds were the proximate cause of the dust storm. But there was more to it than that.

This is the U.S. Drought Monitor map issued on Tuesday, March 11 — the very day of the High Plains haboob. Take a look at southeast Colorado, southwest Kansas, northeast New Mexico, and the panhandles of Oklahoma and Texas. This entire region is categorized as being in severe to exceptional drought.

As the latest drought monitor indicated:

Over the past 60 days, precipitation totaled 3 to 6 inches less than normal across central and east Oklahoma, southeast Kansas, north and west Arkansas, and south Missouri. Both 60- and 90-day amounts are only half of normal at best across the south-central Plains approaching the Red River Valley and Texas.