Have We Finally Learned How to Talk about Climate Change? 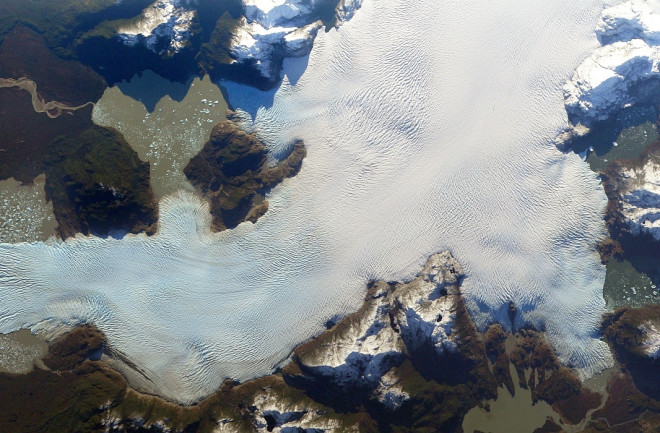 The San Quintín glacier in the Andes Mountains in Chilé is seen in this stunning image captured on June 2, 2014 from the International Space Station. As with glaciers around the world, San Quintín is losing significant amounts of ice, contributing to sea level rise. This, in turn, is increasing the risks faced by billions of people who live along the world's shorelines. (Source: NASA Earth Observatory) I wrote my first feature article on global warming way back in 1984, and for a long time afterward the issue was framed pretty much along the lines of "global warming: yes or no?" Scientists settled that a long time ago: Yes, the Earth is warming, and yes, we humans are largely to blame through our emissions of heat-trapping greenhouse gases. In more recent years, the framing has shifted: "Global warming: Is it going to hurt us — yes or no?" People on the right of the political spectrum in the United States have argued that until scientists can prove that the answer is 'yes' we should do nothing. Today, thanks to a series of remarkable developments, I think the framing of the issue may soon shift dramatically to what it should have been for all these decades: managing risk. No one can predict the future with precise accuracy. And in mundane aspects of our lives we accept this reality of uncertainty with little hesitation. In fact, we actually spend lots of money to shield ourselves from the consequences of events that are highly unlikely to occur. For example, we shell out considerable sums to insure our homes against fires that, for most of us, will never come. But while the risks are relatively low, the consequences are exceedingly high. So we protect against that risk by spending money on insurance. But with climate change, we're metaphorically akin to folks who choose to live in drought and fire-prone forests of the West. Fires have already swept in real close. Some sheds have even burned down. And so we've been warned: Sooner or later the chances are good that something really bad is going to happen. Yet, for the most part, we've steadfastly refused to take out any fire insurance. Since I began covering climate change, managing risk has not been the dominant frame for the raucous debates that still continue. But I honestly think that's changing now — and quite dramatically. What leads me to say that? On June 2nd, the Environmental Protection Agency came out with a comprehensive plan that would cut emissions of greenhouse gases from power plants by as much as 30 percent of 2005 values over the next 15 years — and the public strongly supported it. Then yesterday, the Supreme Court mostly validated an EPA program that's already in place to deal with greenhouse gas emissions from power plants and factories. (Even Antonin Scalia, one of the court's most conservative justices, concurred.) But that's not all. Last Sunday, Henry Paulson, a Republican and former Secretary of the Treasury in the Bush Administration, made a compelling case in the New York Times for action on climate change. In his op ed piece he argued that by continuing to emit greenhouse gases into the atmosphere we are heading down a path similar to what happened in the run up to the financial crash in 2008, which was triggered by the bursting of a massive credit bubble. "We’re making the same mistake today with climate change," Paulson wrote. "We’re staring down a climate bubble that poses enormous risks to both our environment and economy. The warning signs are clear and growing more urgent as the risks go unchecked." Tackling climate change — mitigating it to the extent that we can and adapting to changes that are already inevitable — will cost money. But ignoring the risks it poses to society is likely to cost our economy much more, he argues. And finally today, we have the release of a major report spearheaded by Paulson and a bipartisan group of public officials and business people. It details the economic perils we face if we don't face up to the risks posed from climate change now. Tellingly, the report is titled "Risky Business," and it urges businesses and economic leaders to apply the tool of risk management to deal with climate change. Such an approach is "part and parcel of the free enterprise system," Paulson says in an NPR interview about the report. From the report:

Our research combines peer-reviewed climate science projections through the year 2100 with empirically-derived estimates of the impact of projected changes in temperature, precipitation, sea levels, and storm activity on the U.S. economy. We analyze not only those outcomes most likely to occur, but also lower-probability high-cost climate futures. Unlike any other study to date we also provide geographic granularity for the impacts we quantify, in some cases providing county-level results.

And the bottom line:

Our findings show that, if we continue on our current path, many regions of the U.S. face the prospect of serious economic effects from climate change. However, if we choose a different path — if we act aggressively to mitigate future impacts by reducing carbon emissions — we can significantly reduce our exposure to the worst economic risks from climate change, and also demonstrate leadership on climate.

The report states that the "American economy is already beginning to feel the effects of climate change," and these are likely to grow over the next 5 to 25 years. In the short term, for example, we should expect these impacts:

And that's just in the short run. The risks, and the costs for managing them, rise significantly over time — unless we begin to grapple with them now. Maybe I haven't been scarred sufficiently from the cynical climate debates that have raged since I wrote that first story three decades ago. And so maybe I'm just being overly optimistic. But just a couple of weeks after scientists revealed that the mighty glaciers of the West Antarctic Ice Sheet may have crossed a threshold leading to an inevitable, centuries-long collapse, I really do think we have finally begun to figure out how to talk about climate change sensibly. Will effective and comprehensive action follow?